Enrique Iglesias sat down to chat with several of his fans via webcam for VEVO’s Ask:Reply, including Andy and Sam. The American pop singer talked about the first words to describe his music career were “blessed” and “lucky” and how his most embarrassing moment was passing gas in a movie theater while on a first date with a girl. 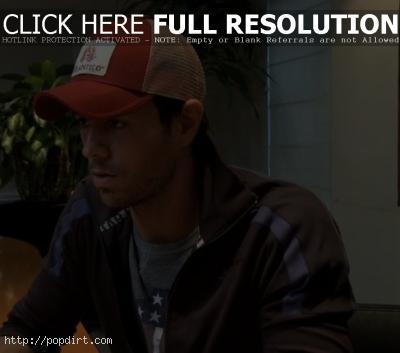 Asked about the word that describes his music career, Enrique cited “blessed” and “lucky”, explaining, “I say that because not a lot of people get to do what they love in life, and make a living out of it. I say this all of the time in my interviews, because if you were to ask me when I first signed my first record contract, I was just a year older than you, and if you would have asked me back then when I was 17-18 that I was going to be able to do this for 15 years, I would have told you that you were absolutely nuts. I don’t know what I would do without my music. The people that I love the most, the closest people to me, I feel bad for them because I always put my music and my fans first. They understand but it’s truly the two things that make me the happiest. I feel very lucky that I’ve had such a, I don’t want to say long career to sound too, too old, but 15 years to me in the music world is an eternity. For a lot of people it would be, but hopefully I’ll be able to do it (longer).”

Questioned about his most embarrassing moment personally, Enrique said, “I remember being on a date with this girl, I remember her name perfectly. I was in the movies, and I was watching ‘Basic Instinct’, and one of those quiet scenes in the movie, I farted really loud. It was pretty embarrassing, because when I asked her out on a date again, she didn’t want to go. I think that fart, it didn’t seal the deal.”

«Ellie Goulding Discussses Dying In ‘Anything Could Happen’ Video
Justin Bieber Is NOT Dead, Did NOT Run Over Or Murder Paparazzo»