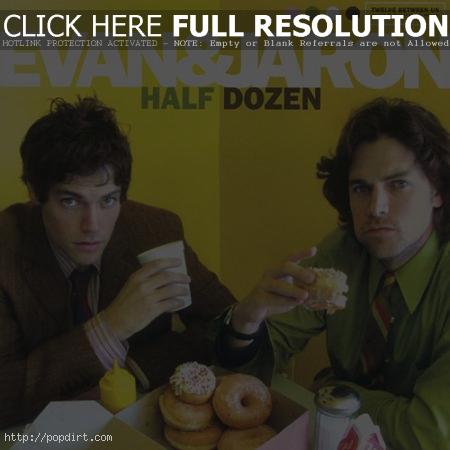 Evan and Jaron posted a lengthy message on their official website Thursday (March 11) to lay out their plans in releasing their new album ‘Half Dozen’ on April 13th independently after exiting Columbia Records. The duo had hoped to release the album for free with advertisements on the CD, but ran into resistance. Instead, they’ll sell the album for $5.98 for the first 60 days, and $9.98 from that point forward. Read on for the complete message.

a lot going on… new record HALF DOZEN is in stores EVERYWHERE on
April 13, 2004. everywhere means that it should be available in every store,
however, just like with every record, you may find that you’re favorite
store doesn’t have it in stock for some reason… either they sold out
or they didn’t think they’d sell any copies… who knows… but since you
love us so much, you may have to go to your second favorite record store
(after cursing out the first one of course), and get your very own copy.
it’s worth it (you trust me, right?). of course, you can always buy it
online through our website (you can actually pre-order it now at http://www.awarestore.com/index.cfm?fuseaction=view_item&nav=music&Item_ID=10621
). ah, we make it so convenient for you. is that slogan taken? maybe that
could work for us? “evan & jaron, we make it so convenient for you.”
it must be taken… just too good.

let’s talk about the price of the record for a second… jaron and
i brainstormed every possible method in which we could get the record into
your hands for as little as possible. we searched for a sponsor to pay
for the production costs of making the actual cd so we could get it to
you for free (we figured that no one would care if the record said “Preparation
H” all over the place if you were getting it for free, right?). i guess
we’re a little ahead of our time, because we encountered a lot of resistance.
many people weren’t ready for such an undertaking; others simply didn’t
want us to establish a trend of low priced (or free) records for fear that
it would effect other artists’ sales (hey, we’re just honored they thought
we could start a trend!). well, we’re not so great with authority, so here’s
where that brings us: HALF DOZEN will be available for the awesome low
price of $5.98 for the first 60 days. it will then have to go to it’s suggested
retail price of $9.98. we prefer to look at this as the best stock tip
you’ll ever get — it’s at $6 now and it’s going to be at $10 in two months…
i doubt you’ll find that kind of return anywhere these days… it’s an
investment — go out and get a few will ya?

jaron and i are walking through a forrest with a candle, constantly
bumping into one another and asking which way to go… we’re blazing our
own trail and the past 6 months have been the most exciting time in our
careers (a bit scary as well i might add — i’m afraid of the dark). we
hope you will go out and support us by buying our record (did i say record,
i meant records)…

we’re currently working on a tour that would take us around the country
from late april – june… we’ve been working on the show and it’s going
to be a blast (and quite funny… to me anyway). it’s just going to be
the 2 of us and our toys (and maybe a few special guest from time to time).
we hope to see you out there.

so that’s it for now, i suppose. you know where we stand and we hope
you will be there for us like you always have been.

(my mom signs my dad’s name too, and he never does anything)