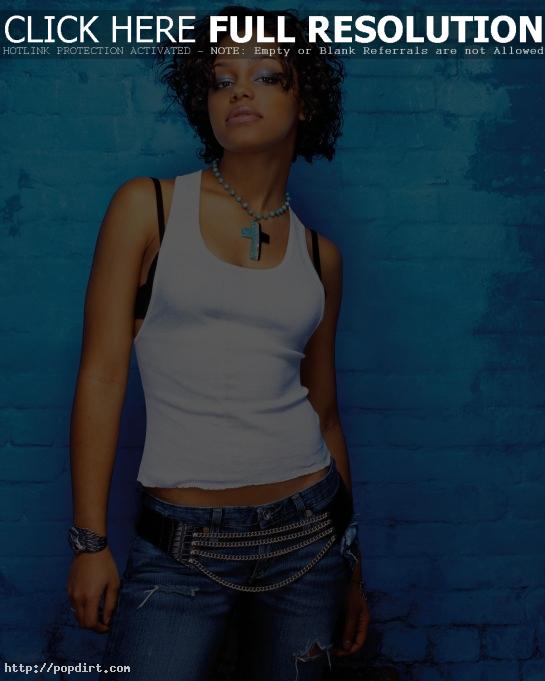 Fefe Dobson stopped by MTV’s Total Request Live on Monday ahead of her self-titled album which debuts on December 9th. Fefe chatted about how she was discovered, her crazy mother, the bold messages in her music, why she needs to chew gum when performing, and she flirted with interviewer Damien. Read on for rough transcript.

TRL: This is Fefe Dobson, everybody.

TRL: I want to take you over to the window since it’s your first time here on “TRL.” And I want to show you all the signs out here for you. This does not happen with a lot of first timers. You see thee be very proud of yourself.

TRL: Some great signs supporting you out there. Take a step over here. 18 years old. Right? Is.

TRL: Does it feel like it’s taken a long time to get her here?

Fefe: It’s taken the right am of time. I wouldn’t have wanted to come
out anytime earlier.

TRL: I read up on you. It said you were discovered a bunch of times.
What’s up with this?

TRL: Your mom said you came out of the womb singing.

Fefe: She also said she was abducted by aliens.

TRL: We got to get your mom on here.

TRL: How did you get discovered for this record here, that’s coming
out December 9th?

Fefe: Basically, you know, I did a showcase for Chris Smith Management, who also managed Nelly Furtado and they brought me on board. And a couple months after that we did a showcase for Def Jam in Toronto. They flew down and 30 seconds into the first song, they were like, this is our girl. She’s the epitome of Island Def Jam.

TRL: Really? That’s how they talk?

TRL: You have a bit of a rock edge on the album. Are a fan of pop music?

Fefe: Yeah, I’m a fan of all music. I like Michael Jackson. I love *NSYNC.

[ Cheers and applause ] I went to every single *NSYNC concert in Toronto. I have to admit I’m not against pop I love it.

TRL: And the song “take me away,” very personal song. What’s the song about here?

Fefe: Basically two people that want to be together and maybe they can’t be together because of age or race or religion, but also i was really, really inspired by Sid and Nancy and John and Yoko.

TRL: And the song is from someone in your life. Right?

Fefe: In a way. Everyone has a relationship where their parent doesn’t agree or someone in their life doesn’t agree.

TRL: Is there any topics that are taboo that you won’t touch on in your songs maybe?

TRL: Does that song rock?

[ Cheers and applause ] A lot of people in here know you. A lot of people outside know you. They made big freakin’ signs for you. Maybe at people at home don’t know you quite as as well as — as well as i do. It’s time to get to know Fefe Dobson, everybody. First off, we got to start with the obvious. Where did the name come from, Fefe?

Fefe: My mom’s again very weird. And she just —

Fefe: I know. My mom’s probably at home going —

TRL: Gave you all this talent and everything.

Fefe: I think my sister just said Fe and my mom’s like Fe. And they
were like, put it together and you have Fefe.

TRL: Could be a musical on Broadway.

Fefe: If I had my way, I’d want Jessica Alba to do it because she’s so hot.

[ Cheers and applause ] But I don’t know. If it was like an older version, probably like Halle Berry maybe.

TRL: I could see that. Okay. All right. What’s one thing you do every
time before you go on stage, like a pre-show ritual?

Fefe: I have one piece of gum.

TRL: One piece of gum.

TRL: And do you chew it on stage?

Fefe: Well, I find that, you know, if I don’t have the gum, my throat’s
kind of dry. So i like scream at the — no, i don’t scream anything. I’m just like, come on, give me a piece of gum.

Fefe: No. Cinnamon’s norm — yeah, like something that’s kind of minty.

TRL: The person you talk to most on your cell phone?

Fefe: I’ve been talking to David from Simple Plan.

TRL: What do you guys talk about?

Fefe: We talk about you.

Fefe: No, because you’re so cute.

TRL: The D. Man will accept that answer. What’s your favorite idea of the perfect first date?

Fefe: I don’t know. I mean, where would you take me?

TRL: Where would I take you?

TRL: Seafood buffet. Nothing classier than that. That’s Fefe Dobson,
everybody. Big round of applaud. Hey, thank you very much for coming. Appreciate seeing you here. Very talented lady. I think we’ll see a lot of her in the future. Self-titled debut album drops on December 9th