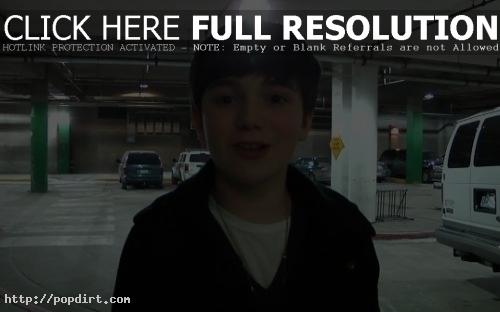 Greyson Chance has announced that he will embark on a North American Tour this summer. The 22 date run will kick-off in Chicago on July 3rd and includes headline dates as well as shows with ‘iCarly’ star Miranda Cosgrove. Other dates include Allstar Weekend, Big Time Rush, Cody Simpson and Shane Harper.

Greyson’s debut single ‘Waiting Outside the Lines’ was recently the #1 physical single in the country for four straight weeks. Both ‘Unfriend You’ and ‘Waiting Outside the Lines’ will be featured on Greyson’s debut album ‘Hold On ‘Til the Night’, set for release on August 2nd via eleveneleven/Maverick/Streamline/Geffen. His debut EP is currently available on all digital outlets.

Greyson Chance is scheduled to appear live on QVC on Sunday, July 10 at 10 AM (ET) to unveil his new album. During the show he will not only perform a selection of songs from ‘Hold On ‘Til the Night’ but also offer fans the opportunity to pre-order the album. The package with bonus DVD will be available through QVC starting July 9th at QVC.com or 1-800-345-1515.

* With Miranda Cosgrove
** With Allstar Weekend
*** With Big Time Rush
+ With Cody Simpson
! With Shane Harper

Popstar! spoke with Greyson Chance on the Kids’ Choice Awards red carpet in Los Angeles last month, where the teen talked about dreaming of winning Best Male Artist since he was little, putting an award on his fireplace if he ever won a Grammy, and that peanut butter and jelly is his favorite snack.

Talking about the award he’d most want, Greyson said, “Probably best male artist. I’m still hoping for that one, so I’m hoping it will come soon.”

Asked what he’s reading right now, Greyson said, “I don’t read a lot, but I’m actually.. What am I reading? Textbooks! A lot of textbooks. Lots of school.”

As for the person he’s most wanted to see at the event, “Steven Tyler. I’m so excited to see him. Hopefully I can meet him.”