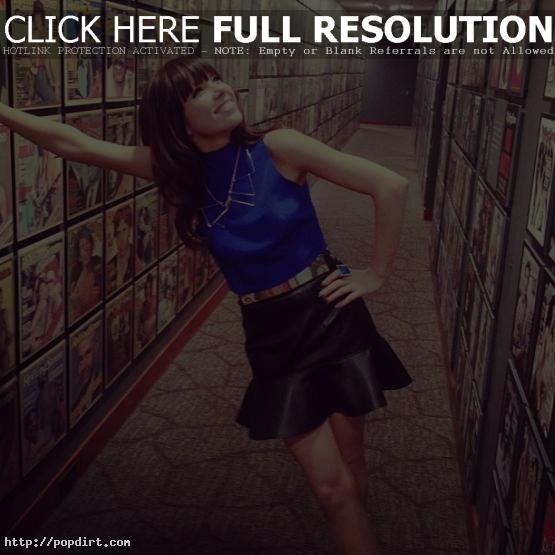 Carly Rae Jepsen was in the studio with Romeo on In:Demand in Scotland, where the Canadian pop singer talked about the success of ‘Call Me Maybe’, how it was a surprise to see it hit #1 in the UK, who she wrote the song with, teaming up with Justin Bieber, how she learned Bieber first tweeted about ‘Call Me Maybe’, getting occasionally overwhelmed about her sudden success, what’s her next step, what to expect from her debut album, having a ‘Canadian Idol’ of songs done by friends and family, and the many versions of ‘Call Me Maybe’ videos.

Asked about whether her summer hit ‘Call Me Maybe’ has gotten stuck in her head performing and hearing it so often, Carly said, “I’m doing a bit of a radio tour right now, so I’m singing the song sometimes eight times a day, so I would say yes, sometimes it gets a little stuck in my head.”

As for whether she expected the success of ‘Call Me Maybe’ in the UK, Carly confessed, “No I can’t say that I did. I always hoped that I would be able to travel with music, but I didn’t expect it to happen this fast and not in such a huge way. It’s pretty great.”

Questioned how she found out about Bieber initially Tweeting about ‘Call Me Maybe’ which got the ball rolling, Carly said, “Actually I didn’t find out from looking at my phone, I found out from a hysterical phone call from my younger sister Katie. To be honest I couldn’t understand her from the first five minutes of the conversation, all it was was ‘La la la la la! Justin! La la la la! Bieber!’ Excuse me? Calm down! It was hard for me to believe when it happened. It was just sort of out of the blue and extremely unexpected. It’s just nice to see what it sparked too, since his tweet and his video he’s kind of encouraged other artists and other fans to make their own videos of ‘Call Me Maybe’ and I’ve been lucky enough to watch a few of them and man are they enjoyable to watch.”

Talking about what fans should expect on her debut album, Carly said, “So far it’s half and half. Half of them are collaborations and half of them are just songs I’ve written on my own, but I haven’t totally made the decisions of what’s going to make the album and what isn’t. I usually throw a big listening party with my friends and my family and I bring popcorn and give them ballots and I let them not cheat and talk to each other and at the end of the day, they pick their favorite five and I find the cream usually rises.”

«Carly Rae Jepsen Lives Vicariously Through ‘Call Me Maybe’
Tom Fletcher: I Would Never Give One Direction Sh** Songs»