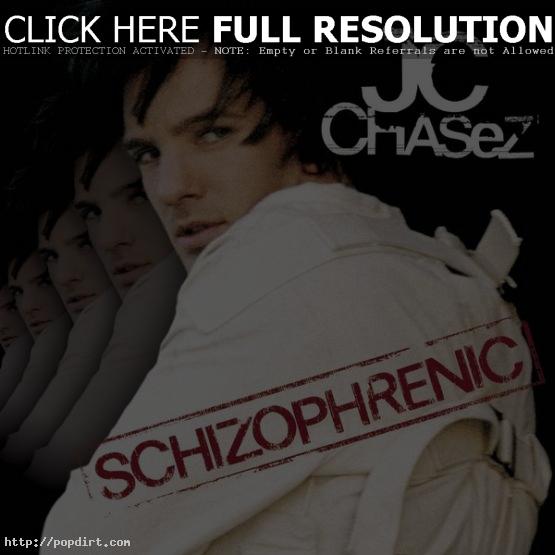 People will compare J.C. Chasez’s Schizophrenic to Justin Timberlake’s Justified, asking which Nsyncer’s solo album is better. Justin said Justified was 10x better than anything Nsync had done. Well, I have to say that Schizo is 10x better than Justified for the simple fact that there is less filler and fewer tracks that make you push ‘skip’ within the first few seconds. But that doesn’t mean this album is impressive. There are a few keepers like ‘100 Ways,’ ‘Build My World,’ ‘Dear Goodbye,’ and ‘Come To Me.’ The other 13 tracks are disposable. A big problem with Justified was that the production was tight but the vocals and lyrics sucked. For Schizo, the production is tight (not as much as on Justified) and the lyrics are a step up, but the vocals are weak and so are some of the cuts that made the album. It should also be noted that Justin got burned for copying Michael Jackson on Justified. JC, too, will get burned for copying Prince. It’s one thing to come up with a whole new style. It’s another thing to do a tribute album to your influences. And that’s what Schizophrenic is. It’s an ode to Prince, Stevie Wonder, and other 80s greats. The problem is that there’s nothing on this album that we can attribute strictly to J.C., which makes me ask what was the point of him doing a solo album in the first place?

1. Some Girls (3:54) – Hands down, the worst song on the album. Maybe the worst song of the year. The beat is straight out of India. J.C., Truth Hurts and Redman already went there. The clapping is annoying. JC obviously was impressed by Lumidee, Sean Paul and Timberlake’s obsession with clapping and figured he’d try it out too. JC, uhm no. And the ‘ho’ chants are annoying as well. He should have realized that after such chants in ‘Blowin Me Up’ failed to connect, it obviously wasn’t something people want to hear. This song is less sung, more spoken. Too bad it’s nothing worth listening to. Whoever suggested to J.C. that this song be released as a single should be shot. On a side note, I think it’s funny that he’s talking about girl on girl action because it’s so obvious that he’s gay, or at least bi. There’s something wrong with your album if people love nothing more than to hit ‘skip’ for the first track.

2. She Got Me (3:27) – J.C. was always supposed to be the opposite of Justin. So I’m surprised that he pulled a Timberlake and did a song that’s straight up Michael Jackson. The vocals and the beat scream Off The Wall. It is an okay song, very radio-friendly. Would make a good choice for a single. According to J.C., this song is about an alien (could be Michael Jackson). How interesting is that? Next. Then he ruins what good there is in the song with annoying clapping and chants of ‘ooh ooh ooh.’

3. 100 Ways (4:14) – Probably one of the best songs on the album, if not the best. The song is so different from anything on radio, anything Nsync has done (thank God), and anything that’s been released in the past few years. The guitar riff and drums in the beginning of the song pull you in. The vocal arrangement keeps you interested. The vocals on this song are nicely done. The lyrics show J.C. may not be as dense as I thought. I can’t think of anyone in pop bold or creative enough to sing, ‘Dripped through the hallways ’cause we started in the shower/ We didn’t finish ’til we hit the kitchen counters.’ The break that follows could have been left out. J.C. pulls a Kelis and uses a lot of metaphors for sexual activity, which keeps this song a candidate for being released as a single. The instrumentation is very nice. From what I’ve heard, the song is talking about having sex in 100 positions. Sorry J.C., but I don’t think it’s feasible to have sex in 100 different ways. If you know 100 different positions, then you can make a fortune by selling drawings to the Kama Sutra fanatics.

4. Mercy (4:24) – Filler. Nice production on this track. The chorus is weak, in terms of lyrics and vocal arrangement. It honestly sounds like Timberlake is singing the chorus. Maybe that’s why it sucks. The track as a whole just isn’t interesting. The bridge is pointless as well. Perhaps the beat should have been given to someone else, someone who could have actually done something useful with it.

5. Build My World (4:15) – The best song on the album. Clearly influenced by Prince and Annie Lennox. The productions and vocals (lead and background) are nicely done. The breaks and arrangement are reminiscent of Nsync’s ‘Gone.’ Guess J.C. is playin’ it safe. In terms of giving someone relevance, this song is J.C.’s ‘Cry Me A River.’ Has to be a single. Honestly, this track makes you say ‘Justin who?’

6. Something Special (3:52) – When this song comes on, the first thing that pops in my mind is: Hanson. It’s like a mix of ‘Mmm Bop’ and ‘This Time Around.’ More annoying clapping. The vocals are alright. Too bad it’s a George Michael rip-off. The whistling is very refreshing. That hasn’t been done in, say, half a decade. The song finishes with chants of ‘nah nah nah nah,’ taking it back to Hanson.

7. If You Were My Girl (5:24)- The beat sounds like it came from a Nintendo game, maybe Pac-man. The arrangement and lyrics are impressive. But the message is the same as too many other songs. J.C.’s adlibs take away from the nice instrumentation on this track. The orgasmic noises at the end made this track appropriate for the ‘skip’ category.

8. Shake It featuring Basement Jaxx (4:33) – You know the BJ are gonna bring it when it comes to the beat and production. J.C. doesn’t bring much to the track though, other than irrelevant and random noises that he makes throughout the song. Steals from the song ‘Do It Til You’re Satisfied.’ The lyrics are meaningless, much like the song as a whole. Just for the sheer fact that it’s radio/club-friendly, it could be a single.

9. All Day Long I Dream About Sex (6:04) – Almost the worst song on the album but takes second after ‘Some Girls.’ The beat starts off as if it’s going somewhere. But the lyrics and vocals ruin it. Another track that’s more spoken than singing. There’s an instrumental break in the middle, makes you want to start breakin.’ But J.C. ruins it by singing afterwards. J.C.’s ‘people’ gave this song the false acronym A.D.I.D.A.S. Somewhere down the road, someone informed that that the acronym doesn’t hold a place for the word ‘long.’ The song is simply annoying. I saw it performed on the Wade Robson Project. Horrible. Cheesy 80s throwback. Definitely makes you press ‘skip.’

10. One Night Stand (3:23) – The intro was pointless. Nice beat, more Pac-man. The chorus is different in a refreshing sort of way. Then more boring talk in the middle of the song. Followed by more stupid noise-making.

12. Dear Goodbye (5:01) – Second best song on the album. The instrumentation could be better. The lyrics seem honest. J.C. seems to open up on this track. Too bad it sounds like something that Justin would do, especially in the vocals.

13. Everything You Want (4:29) – Sting rip-off. Attempts to tap into reggae but just ends up being an embarrassment. If I were from Jamaica, I’d be pissed. ‘Skip.’

14. Lose Myself (4:58) – J.C. obviously loved Justin’s ‘Still On My Brain’ because this song is so predictable. Definitely a Mariah rip-off, i.e. her song ‘Petals.’ J.C. even starts off the song by talking about daphodills. Yep, rip-off of ‘Petals.’ Also has MJ influences. Basically, a typical ballad. Could ‘skip’ it.

15. Right Here (2:43) – When the track starts, it sounded familiar but I couldn’t put my finger on what song it reminded me of exactly. Sounds like MJ’s ‘Butterflies’ a bit. J.C. throws a shout-out to the song ‘Red Red Wine.’ A very mellow track.

16. Blowin’ Me Up (4:50) – This song is so messed up, no wonder it didn’t go anywhere or do anything for the Drumline soundtrack. He tries to be like Prince but fails miserably. The instruments are too much. It clutters the track. The vocals sound off. The lyrics are childish. This is where the ‘ho’ chants started, meaning J.C. started off wrong before he really even got started. And he kept in the wrong direction, since the characteristics that make this song bad show up throughout this album.