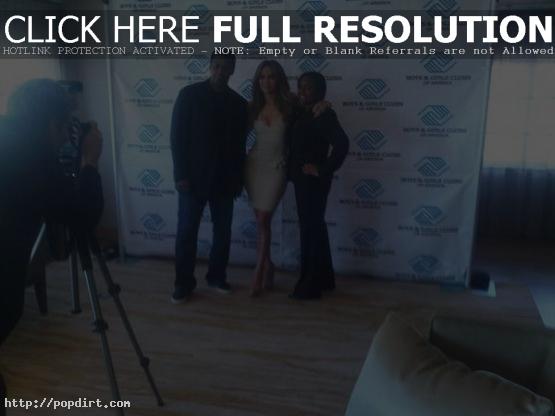 Jennifer Lopez checked in with her Twitter followers (@JLo) earlier today, talking about becoming an official spokesperson for Boys & Girls Clubs of America. The singer posed for a photo with Denzel Washington, has served as national spokesperson for BGCA since 1992. J.Lo writes:

Such an amazing day! BGCA just named me 1st female spokesperson along with Denzel. Here we are mugging. So proud!

December 2, 2010 – ‘The Joy Behar Show’ discussed how Jennifer is attempting to stop her ex-husband Ojani Noa from releasing sexy videos taken during their short marriage with a panel that included AOL PopEater columnist Rob Shuter, actress and founder of the Diva Foundation Ms. Sheryl Lee Ralph, and comedian Carey Reilly. “Once they divorced and she became quite famous, she made him sign a confidentiality clause,” Shuter explained. “So, this is on to that clause. So, I don’t know if this tape will ever be officially seen.” Watch the HLN segment below.

September 23, 2010 – The judging panel for the 10th season of ‘American Idol’ has been announced, and ‘Idol’ host Ryan Seacrest was first to interview the new trio comprised of Aerosmith frontman Steven Tyler, Jennifer and returning judge Randy Jackson. They were also joined by new ‘Idol’ mentor and chairman of Interscope Geffen A&M Records, Jimmy Iovine. Tyler, Lopez, Jackson and Iovine discussed their judging styles, what they’ll look for in contestants and what they enjoy about each other.

“I think, innately you can’t help but want to give them tough love in a sense,” J.Lo said about what contestants can expect from her. “I don’t think I could ever be cruel to another artist because I am an artist and I know what it’s like to put yourself out there, be in front of people and say, ‘Hey, do you like me?'” Watch the interview via YouTube below.