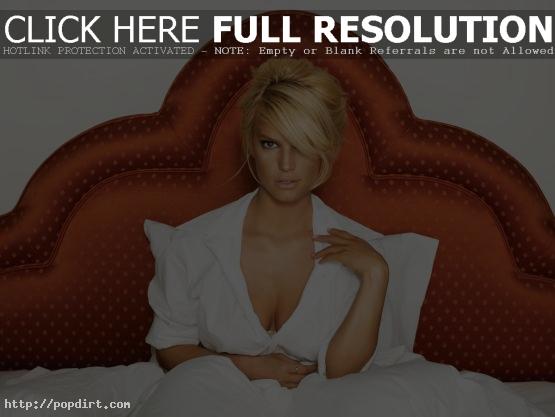 Star magazine reports that when Jessica Simpson visited Kitson boutique in Los Angeles last week, the singer/actress picked up “Team Jessica” T-shirts in a bid to keep up with sales of the “Team Nick” T-shirts. “Jess saw the stack of ‘Team Nick’ T-shirts was much lower than hers,” a source told the magazine. “Nick’s T-shirts outsell hers 40 to 1. She said, ‘I’m going to wear this.’ … She was kind of sniffling, like she was going to cry.” Simpson splurged $10,000 during shopping spree.

May 30, 2006 – ‘Laguna Beach’ star Kristin Cavallari is the front-runner to take over Jessica Simpson’s role in the new ‘Dukes of Hazzard’ movie. Producer Bill Gerber told People magazine: “I like her innocence and her beauty. She is at the top of my list.” Gerber added that the entire cast will be new, and presumably younger, because it’s a prequel.

May 28, 2006 – A source tells the National Enquirer ‘Laguna Beach’ star Kristin Cavallari is lashing out at Jessica Simpson, telling a friend that the ‘Dukes Of Hazzard’ star is “delusional” if she thinks Nick will take her back. “Kristin thinks Jessica’s pathetic,” the pal said. “She says that Jessica is delusional for wearing her wedding band on a chain around her neck like she’s in high school or something. She says that Nick is through with Jessica and she needs to realize that it’s over and move on.”

May 25, 2006 – Life & Style Weekly reports that lonely Jessica Simpson appears to be having serious doubts about her pending divorce from Nick Lachey. “I’m tired of being alone,” Simpson told a friend. “I have no one to come home to, no one to call at the end of the night. I’m traveling all over the place by myself. When I was with Nick, I had someone who understood what I was going through.”