Moments after Jessica Simpson performed ‘With You’ on ‘The Early Show’ this morning (it will air on Wednesday), Jessica Simpson was seen shaking and crying, as her friend and hairdresser Ken Paves attempted to console her. While TMZ.com suspect it was because the song is about her ex-hubby Nick Lachey, she still was suffering from vocal problems and may have gotten the early word that her first week album sales are setting up to be disappointing, though not as disastrous as earlier figures at HitsDailyDouble.com suggested. With 24.9% in, Simpson is now at #5 with 20,896, on pace for about 85,000 units.

Footage at TMZ.com has since been removed.

Update: final sales numbers are in at HitsDailyDouble.com, with Simpson’s ‘A Public Affair’ selling 99,076 copies in its opening week, good enough for the #4 position.

Jessica Simpson Gets A Lesson In Freebie Tax Law

September 5, 2006 – Jessica Simpson was overheard interrogating Manhattan attorney Salvatore Strazzullo about the tax implications of the free gifts she received last week at the MTV Video Music Awards, in wake of new IRS rules deeming the items taxable. “Just out of curiosity, how would the government find out about these gifts that everybody is getting?” Simpson, who has been suffering from a burst blood vessel in her vocal cords, croaked. He replied: “Each company has to file gift tax returns pertaining to everybody that received gifts, and then the IRS will compare those to the individual tax returns of the recipients.” The spy revealed that Simpson looked dumbfounded. 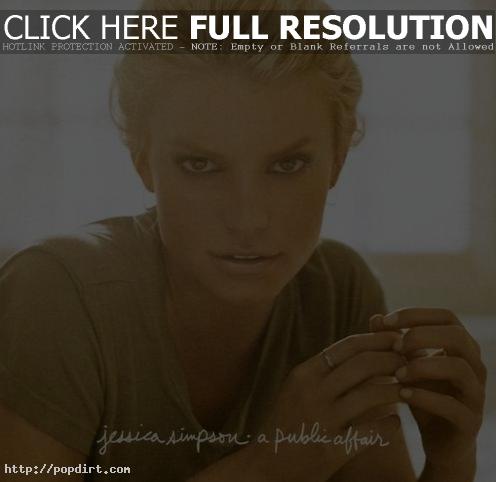 September 5, 2006 – Very early sales figures at hitsdailydouble.com suggest Jessica Simpson’s new album ‘A Public Affair’ will not be in the top 10 in its opening week. With 3.35% in, Simpson is at #15 with 1,293 sales of the album registered, putting her on pace for less than 40,000 units sold.

September 5, 2006 – With Jessica Simpson’s new album ‘A Public Affair’ currently rated only at #39 on Amazon.com’s music sales chart, Roger Friedman of FoxNews.com wonders if the ‘Newlyweds’ star is in for a sales disaster. “It could be that Simpson, like Paris Hilton, has finally over-saturated her market with style (so to speak) over substance,” he writes. Friedman also mentioned the conveniently timed item that she was dating John Mayer, prompting him to post a Public Enemy ‘Don’t Believe The Hype’ single cover on his web site’s blog.