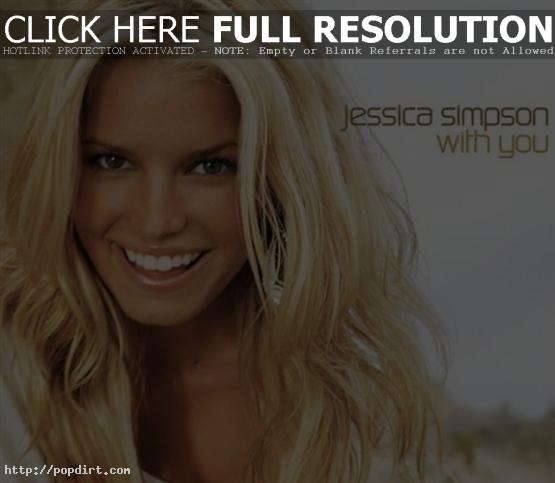 Jessica Simpson scored her first No. 1 on the Mainstream Top 40 chart this week. Her ‘With You’ bumped ‘The Way You Move’ by OutKast featuring Sleepy Brown from the top, even though the latter song is up slightly in detections. Simpson’s only other Billboard No. 1 occurred on the Hot 100 Singles Sales chart in December 1999 with ‘I Wanna Love You Forever.’

February 29, 2004 – Us Weekly reports Jessica Simpson recruited Dolce chef Mirko Paderno to help her whip up a Valentine’s Day dinner for hubby Nick Lachey of 98 Degrees. “I decided to teach her how to make lobster ravioli,” Paderno said. “I told her we could make it together.” The chef admits Simpson had a bad reaction to killing the lobster. “She about cried when we killed it,” Paderno revealed. Instead of cracking it in half and ripping off the tail, Jessica held the lobster’s head while Paderno ripped off the tail.

The re-release of Jessica Simpson’s “In This Skin,” out Tuesday, contains three new tracks including “Take My Breath Away” by Berlin and “Angels” originally by Robbie Williams. Jessica-Simpson.org has posted the album version of these two new tracks.

In This Skin Re-Release Wal-Mart Exclusive

Purchasing the re-release of Jessica Simpson’s ‘In This Skin’ at Wal-Mart, according to a promotional advertisement at at Jessica-Simpson.org, customers will receive access to a ConnecteD fan web site where they can listen to an audio stream of ‘The Star Spangled Banner’ performed at the Orange Bowl. The ConnecteD web site will also show behind the scenes footage, music videos, and much more! Jessica-Simpson.org is also giving fans a chance to win an exclusive promotional poster.

February 19, 2004 – Billboard reports Britney Spears cruises to No. 18 from 22 with ‘Toxic’ in its fifth week on the chart. Coming in right behind Britney for a second week in a row is Jessica Simpson’s ‘With You’ which advances 23-19. Jessica’s album ‘In This Skin’ will be re-released on March 2nd containing 3 bonus tracks one of them being an acoustic version of her hit ‘With You’. After a big debut last week Janet Jackson’s ‘Just a Little While’, the first single from her upcoming album ‘Damita Jo,’ could only manage a 2-point gain to No. 45.