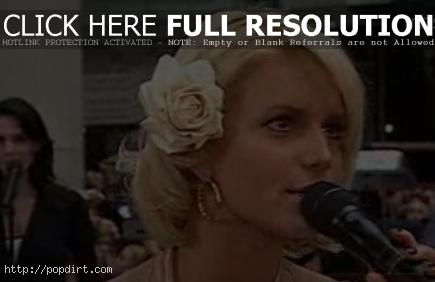 Jessica Simpson talked to ‘Today’ show co-host Matt Lauer about her throat problems and her new album ‘A Public Affair’ on Friday (September 1). Simpson told Lauer that she did not in fact have laryngitis, but had suffered a burst blood vessel on her vocal cord. The singer then revealed a homemade remedy given to her by her voice coach, of which Lauer took a sniff and identified, with mock shock, as “pure liquor.”

Video of the interview and performances of ‘With You’ and ‘I Belong To Me’ at Bing.com has since been removed.

Pictures are available from GettyImages.

September 1, 2006 – Jessica Simpson confirmed what many had suspected to Glamour magazine… she plumped up her lips at the time of her break-up with Nick Lachey. “I had that Restylane stuff. It looked fake to me,” she said. “I didn’t like that. But… it went away in, like, four months. My lips are back to what they were. Thank God!”