Joe Jonas Haunted By ‘Froggyman’ In His Dreams 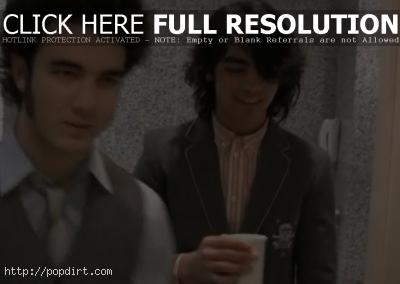 Popstar magazine chatted with The Jonas Brothers, where the sibling pop trio were asked if they ever had recurring dreams.

Then Kevin revealed Nick’s worst nightmare as a 10-year-old, that slave drivers were going to steal him away. “Not supposed to talk about that,” Nick said.

The Jonas Brothers And The Queen Draw A Crowd

Pepsi Smash’s webisode three of ‘Being: The Jonas Brothers’ has been posted on Yahoo! Music. The clip again features the sibling pop trio in London, England, where they talked about the city was “everything they dreamed that it would be”, getting a chance to meet a fake Queen and enjoying the reaction from bypassers who thought she was real, and how they were largely able to walk the streets without being mobbed by fans like they would in the U.S.

The Yahoo! video has since been removed.

One thought on “Joe Jonas Haunted By ‘Froggyman’ In His Dreams”