John Mayer Performs In The Plaza On ‘Today’ 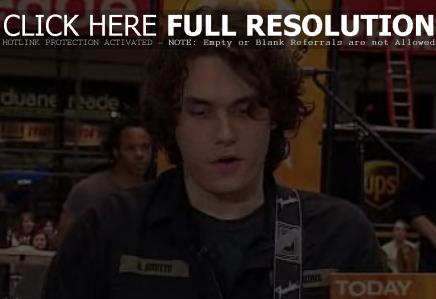 John Mayer performed live during the ‘Toyota Concert Series on Today’ in New York City on Friday (August 25) at the Plaza.

Video of Mayer’s performances of ‘No Such Thing’, ‘Daughters’, ‘Waiting on the World to Change’ and ‘Vultures’, as well as an interview, has since been removed at Bing.com.

August 26, 2006 – John Mayer took part in a Coupla Questions with MuchMusic.com, where he was asked how his new album ‘Continuum’ is different than his previous efforts. “The vibe was completely different because mostly all the tracks were recorded live, meaning all at once,” he explained. “And then there were things that were overdubbed. I’ve never played guitar at the same time as drums and bass on my records. We were able to create a vibe. ‘Bold As Love’ is a vibe because we were all in a room playing. All these feelings – I remember being in a room playing with these guys. And that’s a really special thing to have a record where you don’t have that amnesia of, ‘I guess I played on it, cause I hear myself playing, but I don’t remember when.'”

The story at muchmusic.com has since been removed.

John Mayer In A ‘Huff’ About Showtime’s Cancellation

July 15, 2006 – John Mayer isn’t happy about Showtime cancelling ‘Huff’. The singer/songwriter wrote on his official web site’s blog on Thursday (July 13): “Cancelled. Who knows why. Maybe the fact that a show of such emotional depth ran on America’s number one boxing network. Maybe the (more cynical) answer is that there just aren’t enough people who are connected with their own feelings in a way that allows them to watch made-up characters on a TV show try to wrestle with theirs. You’d think with 293879 TV channels you’d have to make peace with splitting the pie appropriately, but I guess America’s Number One Boxing Network didn’t feel as if they had captured enough of the psychologically enthusiastic crowd that they know are out there.”