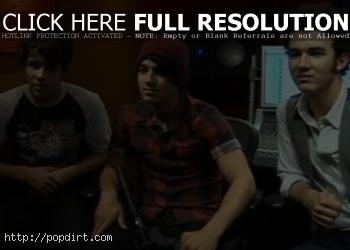 ITN Music caught up with the Jonas Brothers, where the sibling trio were asked about boy bands that inspired them, citing the Backstreet Boys and *NSYNC, but Kevin insisted they consider themselves a pop rock band. Joe said the best thing about going on tour was going to all the different places, while a lack of sleep is the worst aspect. Nick compared the band’s music to an orange, and said their dream collaboration would be with Elvis Costello.

“Boybands, we grew up listening to them I guess,” Kevin said about groups that inspired them. “Backstreet Boys, we got to open up for them a long time ago, early in our career. As a band, we consider ourselves a pop rock band. Definitely, we love that, but the boybands, definitely the Backstreet Boys and *NSYNC, we definitely listened to them growing up.”

On the best and worst things about touring, Joe said, “I think the best thing is being able to meet the fans that have your CD and you’ve never met them, so it’s cool that you can meet them. The worst thing, sometimes you don’t get much sleep, but that’s just how it is. We enjoy what we do and love it. It’s the best thing in the world.”

Watch the clip below the fold.

The Jonas Brothers started working with a product called Breakfast BREAKS to get the word out that eating breakfast is the best way to start your day. The sibling trio’s entire family is in the commercial, including their mother, father, and younger brother Frankie. In addition, Breakfast BREAKS is also going to be with the group on this summer’s ‘Burning Up’ tour. Watch the commercial at breakfastbreaks.com, and check out a related YouTube video below.