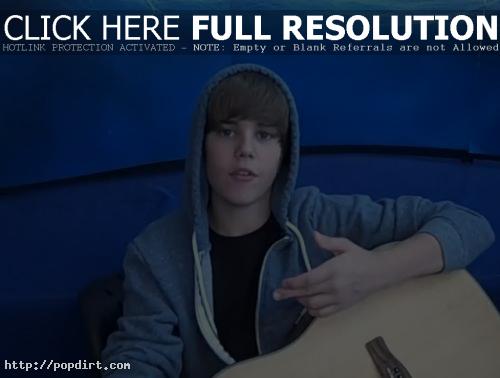 Justin Bieber was spotted leaving the Black Eyed Peas concert with his arm around the girlfriend of his manager Scooter Braun on Tuesday (March 30) in Los Angeles.

The pop star awoke to news that his new album ‘My World 2.0’ debuted atop the Billboard album charts after selling 283,000 copies in its first week. Bieber’s first album, ‘My World’, debuted at #6 last November. The 16-years old has become the youngest solo male artist to reach the top spot on the Billboard 200 since Stevie Wonder did on August 24, 1963 at the age of 13 with ‘Little Stevie Wonder/The 12 Year Old Genius.’

Still, the news wasn’t viewed as impressive to Simon Vozick-Levinson of ew.com, who wrote that wasn’t “a knock-out, blockbuster number, even in today’s ever-diminishing commercial market” in comparison to recent releases by Sade and Lady Antebellum. That commentary didn’t go over well with Justin, who told his Twitter followers (@justinbieber):

It’s all good.. let’s prove the haterz wrong.. go get MY WORLD 2.0 in stores NOW