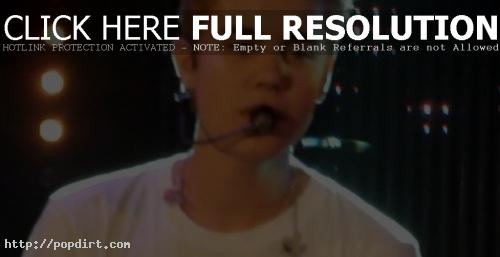 103.5 KTU in New York welcomed Justin Bieber to the studio to talk with Cubby Bryant and Cindy Vero. The Canadian pop star talked about if he gets tired of doing radio promo, what he does to chill, calling Cubby Chubby his last visit to the station, collaborations, what the gameplan is normally when he heads to the studio, if he’s ever had to leave the stage to use the bathroom and which Jonas Brother he’d kill.

On what he does to chill:

I’m normal. I like to just watch movies, relax. I go to my computer. I’m always on Twitter.

On calling Cubby “Chubby” in a radio drop his last visit:

You know what, after I recorded it, I re-recorded it and said Cubby, but they just gave you the Chubby version.

I would have loved to have done a collaboration with Michael Jackson. I think that would have been amazing, but I got to work with all the people I really wanted to work with on this album. I got to perform with Stevie Wonder during the Christmas album cycle, so I’ve got to experience a lot, so it’s been great.

On what his studio setting usually is:

Usually we go in like 6 or 7 and get everything rolling. We order some food. Then if it’s a writing session, we start writing. Sometimes if we’ve already written the song, we cut the song and we go in and me and Kuk (Harrell), who is like my engineer and my vocal producer, he’s amazing. Sometimes I’ll be in there all night, sometimes I’ll be in there a couple of hours and knock it out.

If he had to kill a Jonas Brother, who would it be:

I think that it’s all love. No killing involved.

Listen to the interview via ktu.com below.