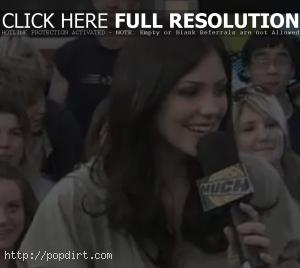 Asked about the ‘Idol’ sensation Sanjaya Malakar, she said, “I kinda feel bad for the guy. I mean I feel bad for him and I don’t, because he’s the biggest star off the whole show, but I think it would be awesome if he won the show and then he went off and sold more records than anybody ever. I think it would be cool because he’d have a lot to prove and a lot of little girls like him.”

Asked if the relationship with her boyfriend Nick Cokas is better now that she’s famous, Kat said, “I think the thing about relationships, especially if you’ve been together for awhile, there’s always ups and downs and falling in and out of love and that’s the excitement of it. Actually, ‘Idol’ was really hard on my relationship and I’m surprised it survived, and I’m sure he’s surprised too… It’s definitely hard when you’re in that kind of circumstance, because you don’t get to see your family, your friends, your boyfriend.”

Watch the interview below. Check out pictures from GettyImages.