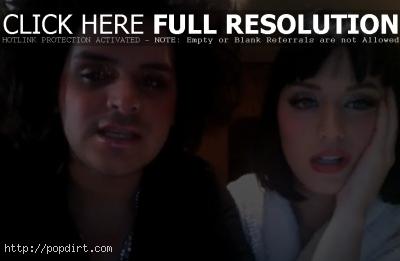 Katy Perry and Markus Molinari checked in from the set of Katy’s ‘Waking Up In Vegas’ video shoot, where Markus plays a real housewife. The pair introduced several mannequin heads making a cameo in the video, ending with pretend mannequin head Ferras.

“We have a few friends that we want to introduce to you before we started the shoot because there is a lot of important cameos,” Perry said. “First of all, cameo number one, my stand-in for my music video is Markus Molinari. She is a real housewife of somewhere. She’s a real playa. This is one of our friends who is gonna make a cameo in the video, (mannequin head) Suzanne. You’re so pretty! Our other friend, she’s like newer in our crew, (mannequin head) Debbie!”