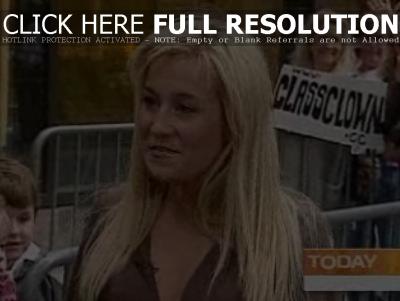 The brief interview at Bing.com has since been removed.

April 28, 2006 – Conan O’Brien joked during his Late Night monologue on Thursday night, “Of course, everybody these days watches ‘American Idol’. It’s huge. Fans of ‘American Idol’ were shocked last night because Simon Cowell began the show by apologizing for being too rough on one of the contestants. Yeah. When asked which contestant, Cowell said, ‘The douchebag. I apologize.'”

April 27, 2006 – Ousted ‘American Idol’ finalist Kellie Pickler phoned in to KIIS FM in Los Angeles to talk with Ryan Seacrest and Ellen K. Sam Rubin of KTLA was on with her to begin with where a fan serenaded her. They talked about her long list of thank-yous that was cut off Wednesday night, picking her bags last week and this week thinking for sure she was leaving, getting soaked by a bidet and screaming after getting squirted by the stream, and more. The 6 1/2 minute interview at kiisfm.com has since been removed.