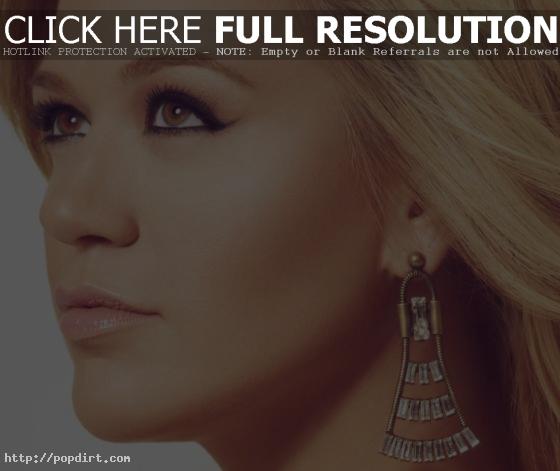 Kelly Clarkson recently visited with Andy Jackson of Wave 105.2 in Southampton to discuss being “new” to the industry, how she created some controversy on Twitter during election season endorsing Ron Paul, if she felt the television talent show landscape has changed since she was on the first season of ‘American Idol’, whether she’d advise others to try the television singing competition shows like she did, keeping in touch with ex-‘Idol’ and now ‘X Factor’ judge Simon Cowell, and how she enjoyed her opportunities to mentor others on those programs.

“You know I’ve been fortunate to do a lot of cool stuff. At the same time, I am new. I’ve only had 6 records maybe. 5 or 6. I’m fairly new. It’s not like I’m into the status of having 10 records or something. I’ve been very lucky, surrounded myself with some good people. I’ve got really awesome fans.”

On getting into Twitter “trouble” during election season, Kelly said, “Yeah, I don’t really call it trouble. I don’t think you’re ever in trouble if you just say what you think.”

Asked how the television talent show process may have changed since her time, Kelly said, “Honestly it’s no different from when I was on it. It’s no different from just a normal artist getting into the industry. There’s so many hoops that you have to go through, and it’s still the same industry and it’s all politics. It doesn’t matter if you come from a show or if you come from just walking into somebody’s office. There’s always going to be the same kind of hurdles and obstacle courses. I don’t think it really matters. If you want longevity and you want to be successful in the business, I just think you have to go with your gut and make sure you’re surrounded with some good people.”

Talking about whether she maintains contact with Simon Cowell, she said, “I just ran into him. I sang on ‘X Factor’. I did my single ‘Stronger’ this year on there and ran into him. It’s one of those things where that was for both of us. Nobody knew him in America. Nobody knew me obviously then. Both of us kind of blew up there in America and it was just kind of a cool moment, that first season of ‘Idol’ and I think with Randy (Jackson), Paula (Abdul) and all of us, it’s just kind of a special thing that we all kind of have with each other that is kind of priceless and it’s cool that it’s just such a magical thing we were part of. The biggest show ever to be in America on American television. That’s kind of cool that we all got to be a part of that.”

Questioned whether she would advise others hoping for their break to take the TV talent show route, Kelly said, “I mean, I think you don’t want it badly enough if you don’t. I just think that’s silly, unless it depends on your sound. I’m saying for people that want to be a solo artist or in pop music if you’re a group, if you’re like a ska band or an alternative band, obviously that might not be your best route, but if you’re a solo artist, you’d be silly to miss out on that opportunity, obviously.”