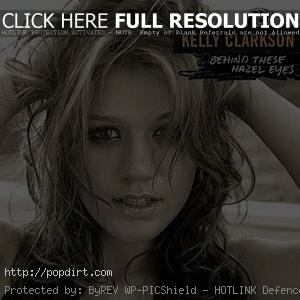 ‘American Idol’ season one champ Kelly Clarkson was on ‘Last Call with Carson Daly’ on Friday, where she was interviewed and performed ‘Behind These Hazel Eyes’ and ‘Since U Been Gone’. The singer talked about the more rocking sound on her sophomore album, how she’s not very wild, how her friends back home in Texas treat her now that she’s a celebrity, touring with Clay Aiken, and more. Read on for a transcript.

Carson: Our first guest tonight is a multi-platinum selling recording artist whose latest album “breakaway” is tearing it up at the charts. But I’ll always know her as the woman who kept my beloved Justin Guarini from achieving the superstardom he so richly deserved. Say hi to Kelly Clarkson. Kelly, come on out here, Kelly.

Carson: Great to have you. Yeah.

[ Cheers ] Crazy, it really it is crazy. I’m embarrassed, they applaud for me like this when you’re here. And, I just — I’m sorry.

Carson: My fans love me.

Carson: Thank you for being here, and thanks for chit-chatting with us here at the top.

Carson: You know what it is, Kelly? It’s the song “since u been gone.” That’s the song that won me over.

Carson: ‘Cause even for dudes that like, like, rock music and might not be into your style of music, it’s just such a great guilty pleasure.

Kelly: Yeah. A lot of people, a lot of rock people come up to me and say that. It’s like their guilty song that they’re afraid to tell their guy friends that they love.

Carson: Yeah. It really is good. If you could hear the names my friends call me for playing it out loud.

Carson: No, but it’s great.

Carson: This rock thing and the whole notion of “Breakaway,” it seems sort of important from the past and the whole “American Idol” thing, right?

Kelly: Yeah, I mean, I’m 22. I’m growing and changing as a girl and as an artist. And it was a direction we decided to take. So we went a little more rock with this and did variations, so —

Carson: Right, so, when you go this rock route, and you start to sound pretty damn good like you are now —

Carson: — You need to start trashing hotel rooms and acting like a rock star.

Carson: You should be doing this interview —

Carson: What do you mean? Oh, you’re dirty?

Carson: That’s good. That’s great. That’s what I like. Now we’re getting somewhere.

Carson: Yeah. But dirty in the rock world is, like, cool. It’s a good thing.

Carson: We gotta work on that.

Kelly: Can I just throw that table right there? Would that be all right?

Carson: Sure, sure, go ahead.

Carson: I dare you. Lift it up.

Kelly: No. I probably couldn’t even lift it, so no. And then the water would spill.

Carson: But see, that’s the way you’re supposed to do it. Do you want me to do it?

Carson: Are you all right?

Carson: She’s a rock star. She can handle it.

Kelly: That was so awesome. I’m not that cool.

Carson: By the way, I couldn’t really afford to have done that.

[ Laughter ] We’re gonna have to get a new table. But that’s the idea, you know.

[ Laughter ] A little anger in that, right?

Kelly: No, it was really funny. Sitting there, she goes, “that’s okay.” Get it out.

Carson: Let’s go back. How long did you live in L.A. Before the show?

Kelly: And he didn’t like us. Anyway, we just saved money, and we moved into an apartment. And the day we moved in it burnt down. So I had to move home after four or five months. Isn’t that just crappy luck?

Carson: Really? Your apartment burnt down. But you were in L.A. Trying to send demos out and get a deal that way. Is that what you were trying to do?

Kelly: I was already — yeah, I was sending that kind of stuff out, but I was already doing back up vocalist work and demo work. Things were going all right. But then this one week was horrible.

Carson: How did your place burn down.

Kelly: They said, like, an old lady fell asleep with a cigarette, but it was an old building.

Kelly: Yeah. She’s so much cooler than I.

Carson: Chrissy Hynde and the pretenders burnt your place down.

Kelly: That sucks. No. No, but it was — yeah, it was an old building. Our insurance didn’t kick in till the next day. It was horrible. We lost everything.

Carson: Yeah. And, Kelly, what is life like now that so much success has happened? And you’re from Texas, right?

Carson: Where do you live? Do you live in Texas?

Kelly: Yeah, I still in live in Texas — like on the outskirts of Dallas in the country, so —

Carson: And when you go back, how do your friends react to you?

[ Laughter ] They’re like, “you’re not getting special treatment” kind of thing. So, I guess that keeps me grounded.

Carson: Yeah. All right, and what about this tour? Are you gonna do a tour?

Carson: By the way, the best thing about your tour is that you’re not sharing the tour with Clay Aiken, and that’s awesome. That’s gotta be great.

Kelly: No, I love clay. That was a fun tour.

Carson: Really? You do?

Carson: Oh, he always creeped me out just a little bit.

Kelly: You would enjoy him. He’s very smart, very witty.

Carson: Nice guy — no, nice guy, I just didn’t know what to make of him.

Kelly: Well, he’s like — when you hang with him — ’cause I didn’t know him before we toured together, but when we hung out, like, he’s very smart and witty.

Carson: Well, what sorts of things did you do with Clay Aiken?

Carson: We gotta stop this. Stop this, Kelly.

Kelly: And then we trashed the hotel room.

Carson: You gotta stop this stuff. Yes, that’s it.

Carson: That’s the type of stuff.

Carson: If you could go see any female singer, who would it be? Who do you like?

Kelly: I absolutely love her. Like, when you see her live —

[ Cheers ] It’s like an experience. And, like, seriously, at first, like, my friends were like, “Hey, you gotta go and see her.” And I was like, “ooh, I grew up listening to her, love her music, but I don’t know if I’ll enjoy her show.

Kelly: I think every artist — male, female — should go watch her. She’s phenomenal.

Carson: You look, like when I see your videos and watched you perform at sound check today — you look like you’re having a lot more fun with the stuff on this “breakaway” album, and the rock stuff. And you seem like you’re sort of sort of getting some angst out. Is there any of that coming from the —

Kelly: Well, everyone’s got issues, so, yeah. No, it is. It’s fun to perform. It’s very high-energy. And a lot of the songs I wrote. So, you know, it’s personal experiences I wrote about, so —

Carson: Like, when I hear the “since you’ve been gone” song, in my mind I just picture you — and I mean this with all-due respect. It’s sort of a big “f” you to somebody or to the industry or to people who have pegged you a certain way.

Carson: Yeah, right. It really is. Isn’t that a great feeling?

Kelly: That’s such a compliment. Thank you.

Carson: That’s the feeling that you want.

Kelly: Yeah. I had fun with it. We rocked it out. The track, it was originally very pop.

Kelly: And then we ended up rocking it up, so —

[ Cheers ] You’re on to it. I’m telling you. You’re really on to something.

Carson: What are you gonna sing for us tonight?

Carson: All right. We’re gonna let you get rocked up. Stay right there though. We’ll be right back. Kelly Clarkson. “Breakaway’s” the album. Go out and get it.