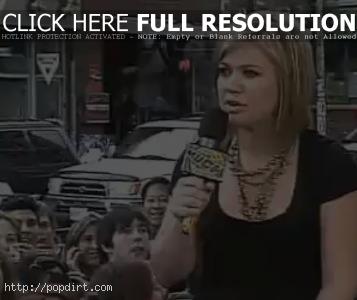 ‘American Idol’ season one champ Kelly Clarkson dropped by ‘MuchOnDemand’ in Toronto on August 20th to chat with VJ Matte Babel about her latest material and went head-to-head with the VJ is a special game of Musical Charades.

Talking about the track ‘Can I Have a Kiss’, Kelly said, “It’s the only song I’ve ever written about two totally different people. The verses are about one guy, the chorus is about another person.”

Asked when a guy is off limits, Kelly said, “I think, this is gonna sound horrible, but it’s girlfriends are speed bumps, wives are stop signs. I don’t live by that! If a guy is with someone, I don’t mess around. I just won’t allow it. If they’re with someone, I’ll write a song about it, but that’s about as far as I’ll go.” Kelly added that she’s never been attracted to someone who one of her friends has dated.

Asked if ‘Sober’ is about alcoholism, Kelly said, “No, it’s not about alcoholism. I think everybody has something in their life that you’re addicted to, that you kind of lean on. It’s your crutch. The song is just about not just letting it go, because that’s easy to say you’re gonna stop doing something, but it’s sticking with it… I have my things that I’m kinda addicted to.”