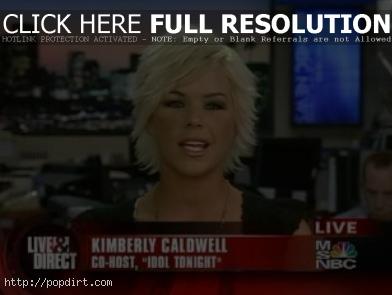 ‘Live & Direct’ host Rita Cosby spoke with former ‘American Idol’ finalist Kimberly Caldwell about the departure of Elliott Yamin. The segment at bing.com has since been removed.

May 18, 2006 – ‘Extra’ spoke with a few stars for their ‘American Idol’ choice in next week’s finale between Katharine McPhee and Taylor Hicks. ‘Grey’s Anatomy’ star Ellen Pompeo said, “I really like Taylor.” Taylor also has the winning vote from ‘The George Lopez Show’ star Constance Marie, who said, he is “a combination between Phil Donahue and George Clooney.” But John Stamos said, “I like that Katharine McPhee– she’s cute!”

May 18, 2006 – In a close vote on last night’s ‘American Idol’, Paula Abdul’s favorite finalist, Elliot Yamin was bounced off the Fox talent contest during the elimination show. The exit of the 27-year-old Richmond, Virginia, resident cleared the path for a final showdown between gray-haired Taylor Hicks and sultry Katharine McPhee. The winner will be crowned May 24th.