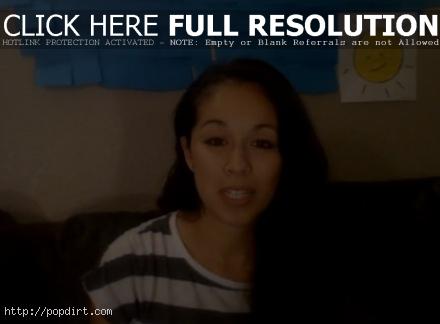 Kina Grannis performed her song ‘Mr. Sun’, which is off her recent album release ‘Stairwells’. The singer songwriter then discussed tour dates in support of the LP. Check out show details and purchase tickets at kinagrannis.com. Because of the unusually non-sunny weather in Los Angeles and a failed attempt to record the song outside due to sirens and helicopters, she drew the sky and sun on her wall instead.

“So give me one minute to explain myself,” Kina said after the performance. “So I wanted to play ‘Mr. Sun’ in celebration of springtime, and so I wanted to play it in the sun obviously outside, where it’s green and pretty. Living in LA, that shouldn’t be too hard, except the last week it’s been all gloomy and rainy and freezing, well, not freezing, 50 degrees. Anyways, it’s been not sunny, so that was feeling and yesterday it was sunny, so I went outside and I must have tried about twenty takes, but I swear to you that every minute there was either a siren, a helicopter, or a really loud truck going down my street, so it was a huge failure and my last resort was, okay, I’ll make a spring inside my house. I decided I’d cover a whole wall in blue Post-its, but apparently that’s as far as a pack of blue Post-its goes, so it’s not quite an entire sky, but it’s enough to give you the gist that is a ‘Mr. Sun’ and it’s the sky.”

Watch the performance and comments via her YouTube below.