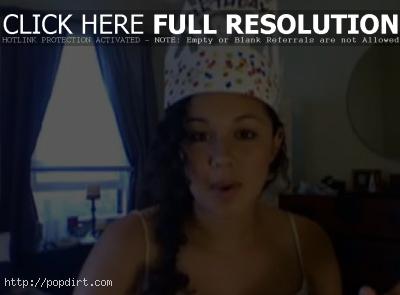 Kina Grannis posted an update on her YouTube channel on Monday (August 4), which also happened to be her 23rd birthday. Kina performed ‘Happy Birthday’ to other fans celebrating a birthday this week. Kina then talked about her show at the Ford Amphitheatre in the Hollywood Hills and wrapped up talking about the YouTube site dedicated to her YouTube birthday shoutouts.

“So I’m gonna make this quick, because otherwise I will spend my entire birthday in front of the computer,” Kina said. “Which I don’t really mind doing, but I just feel I should do something. Later today I will be uploading a very exciting video. It’s David Choi and my little collaboration we’ve been working on.” 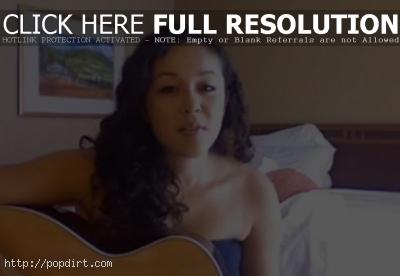 July 23, 2008 – Kina posted a cover of the Switchfoot track ‘Let That Be Enough’ at her YouTube channel. The singer songwriter, recording from her hotel room in Denver, talked afterwards about opening for Switchfoot at a benefit show in Hollywood. The clip ends with Kina at the airport in Phoenix, apologizing for her “lame lame shout outs”.

“I’m sitting here in my hotel room in Denver,” Kina said. “I have a flight to catch in a few hours. I’m gonna be in the airport all day, so hopefully I will be able to send this out on Monday, because today is Monday… Yeah, speaking of Switchfoot, I don’t know if you’ve heard but I’m playing at this benefit concert at the Ford Amphitheater in Hollywood on August 10th. A whole bunch of people will be playing like A Fine Frenzy and Tyrone Wells, Keaton Simons, he’s awesome. Also, Jon Foreman of Switchfoot will be playing, which is really cool because I love him. The lead singer of Vertical Horizon too, and I love them. It should be a really fun show.”

Watch the performance and message below.