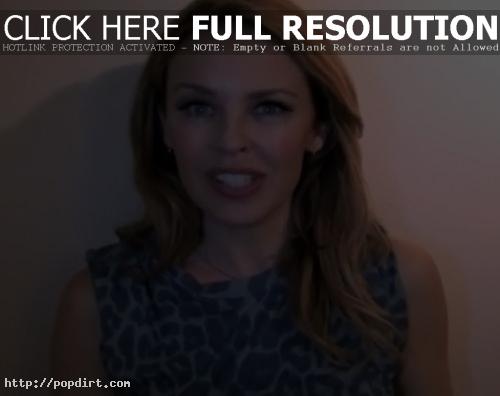 Kylie Minogue was photographed celebrating her 41st birthday with boyfriend, Spanish model Andres Velencoso, by grabbing a late lunch at Le Jardin de Russie in Rome, Italy on Thursday (May 28). It seemed the Australian pop star had a hard time keeping her hands off her man, finding ways to caress and kiss him as they waited for the check.

May 23, 2009 – Kylie Minogue was photographed landing at Nice Airport on Friday (May 22) in Nice, France. The singer was asked by News of the World if she’s planning to marry boyfriend Andres Velencoso. The Australian pop singer looked down at her feet, went bright red and giggled: “Er, I really couldn’t say!”

Kylie Talks With ITN Ahead Of Cannes Show

May 23, 2009 – Kylie Minogue took to the stage in Cannes for the Miracle Africa International Foundation sponsored by Chopard. Kylie spoke with ITN before the event, talking about the intimate gig, wanting to act again but being terrified of auditions, not being nervous about touring America, and her lovely boyfriend. Watch via YouTube below.

May 23, 2009 – Kylie Minogue made a special performance at this year’s Miracle Africa International Foundation fundraiser at the Cannes Film Festival. The Australian pop singer’s showstopping performance wowed guests in the VIP Chopard room as they raised money for the cause.

Highlights from the evening from t5m have since been removed at YouTube.

Kylie Minogue Shops With A Friend In Paris

May 23, 2009 – Kylie Minogue was photographed getting some shopping done in Paris on Friday (May 22) before heading to the Le Bourget airport with a friend to catch a flight out to Nice. Once at the airport, Kylie and her friend opted to take some playful photos.

May 23, 2009 – Kylie Minogue was photographed running errands in Paris on Tuesday (May 19), first going to the bank and then a pharmacy. After a quick change, the Australian pop singer met up with friends to catch the famous French cabaret Lido.