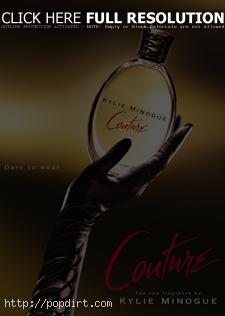 Kylie Minogue has just released a stylish, floral musky fragrance called Kylie Minogue Couture. “Like most women, I’m passionate about fashion and style, whether it’s red carpet glamor or everyday chic,” Minogue said. “With Couture I wanted to create a modern, sophisticated fragrance for every woman with a strong sense of style. I chose the name because Couture is the very heart and spirit of fashion.” The fragrance is available now in the UK as 30ml, 50ml and 75ml Eau de Toilette.

December 9, 2008 – The Sun reports that when David Beckham and his LA Galaxy team took on Oceania All Stars on Saturday in Auckland, New Zealand, he offered Kylie Minogue a personal invitation to the exhibition game. Instead, Kylie attended Alicia Keys’ concert at Vector Arena. “Kylie loves David and is a mate of Victoria,” a friend said, “but she so rarely gets to see top-name performers in action that she jumped at the chance to see Alicia.”

One thought on “Kylie Minogue Couture”