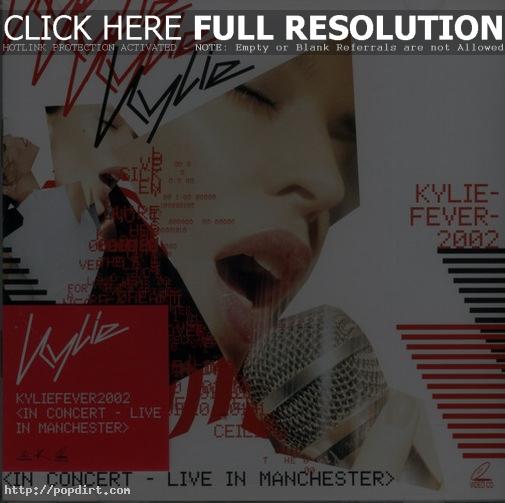 Due to reasons beyond my control, I know much more about Kylie Minogue’s music than I’d really like. My friend Kevin came to adore Miss Minogue in the fall of 2001, so I’ve been subjected to her work over and over and over during the interim.

Kevin’s affection for Kylie hasn’t rubbed off on me, but it has made me more interested in her material than otherwise would have been. Perhaps some of this stems from a curious desire to figure out why Kevin likes her so much. Though I clearly feel no aversion toward female dance pop performers – I adore Madonna and also very much like Janet Jackson – I can’t quite discern what it is about Kylie that so entrances Kevin and her millions of fans around the world.

Nonetheless, I decided to give it another shot when I heard that a DVD release from her 2002 tour would hit the shelves. 2002 was a great year for Kylie, as her album Fever took her to new levels of stardom. Though she’d maintained a very successful career overseas, Americans largely knew nothing about Kylie’s music. She scored with a minor hit in 1988 via her remake of Little Eva’s ‘The Loco-Motion’ but then faded from our view for the most part.

Fever didn’t exactly make Kylie a household name, but with the top 10 success of ‘Can’t Get You Out of My Head’, it did sell pretty well. I couldn’t determine exact sales numbers, but the RIAA certified it as platinum, which means it moved at least a million copies.

Given these significant inroads, one might expect Kylie’s 2002 tour to visit the US. However, she thunk differently. Kylie performed in many parts of the world, but not in America. This decision makes little sense to me. After the commercial breakthrough of Fever, Kylie should have expanded her audience with a tour.

I’d guess that she skipped the US simply because she’d have to play fairly small venues here. Kylie normally performs in large arenas, but I can’t imagine she’d sell enough American tickets to warrant those locations. Perhaps she preferred to skip the US altogether if she couldn’t put on her normal show.

Whatever the case may be, American fans will have to settle for Kylie: Fever 2002 Live in Manchester. Kylie played six shows in Manchester during the Fever tour, and this one comes from May 4, 2002. The concert packs sdd songs, all but one of which appeared on a prior Kylie album; only her cover of ‘The Crying Game’ doesn’t seem to have popped up on an official Minogue release.

For the most part, the Manchester show provided a good overview of Kylie’s career. Kylie plays songs from all her albums except two: we get nothing from 1989’s Enjoy Yourself and 1991’s Let’s Get to It.

Since the 2002 tour touted Fever album, it dominates the setlist more than any other release. We discover six songs from that album: ‘Come Into My World’, ‘Love At First Sight’, ‘Fever’, ‘In Your Eyes’, ‘Burning Up’, and ‘Can’t Get You Out of My Head’. 2000’s Light Years tosses in an additional four tracks: ‘Spinning Around’, ‘On a Night Like This’, ‘Light Years’, and ‘Kids’. Four other albums contributed two songs apiece. We got ‘Cowboy Style’ and ‘Limbo’ from 1997’s Impossible Princess, ‘Confide In Me’ and ‘Put Yourself In My Place’ from 1994’s Kylie Minogue, ‘Shocked’ and ‘Better the Devil You Know’ from 1990’s Rhythm of Love, and ‘The Loco-Motion’ and ‘I Should Be So Lucky’ from 1988’s debut Kylie.

Fever 2002 offered my second look at a Kylie show on video. Previously I examined Kylie Live In Sydney, which came from a concert exactly a year prior to this one. To her credit, Minogue totally revamped the show in between tours. I’ve I noted in my review of her Live In Hawaii DVD, Janet Jackson’s 2002 concerts still looked a lot like her shows from 1998 which looked a lot like her performances from 1994. That didn’t occur for Kylie, as she completely redid the staging for the Fever tour. I admire the fact that she changed things so much despite the brief lay-off between outings.

As for the performances themselves, I thought Kylie’s 2001 show seemed decent but unspectacular, and my impressions of the 2002 concert fell along the same lines. Yeah, she did totally redo the performance, but everything stayed in the same ballpark. I knew what to expect, and Kylie delivered exactly what her fans would want. To a degree, at least. While Fever presented an extravagant and lively piece, Kylie herself seemed less active than in the past. She didn’t appear to dance as much in Fever and looked content to let her dancers and effects take up the slack for her.

Not that Kylie simply stood there and did nothing. Instead, she appeared to spend more time as the center of the storm. While she became more active at times, for the most part she remained somewhat more passive than I expected.

If asked to pick the show’s best moments, I’d put Kylie’s funked-up performance of ‘Kids’ high on the list. She played it simple in the visual domain, as she crooned along with her backup singers and brought the audience to their feet. ‘Kids’ doesn’t do a lot for me as a song, but the new arrangement worked well.

Kylie demonstrated surprising restraint during her show-closing performance of megahit ‘Can’t Get You Out Of My Head’. During the Live In Sydney performance, she deposited ‘Head’ in the middle of the concert, and it received little reaction from the crowd due to the simple presentation and the fact it hadn’t yet been released.

Obviously, it got a much better response from the audience in 2002, but Kylie didn’t jazz up the visuals significantly. Instead, she played the tune fairly straight. Kylie slightly altered the rhythm and other elements, but overall, this seemed like a pretty basic presentation, and it closed the show nicely.

‘On A Night Like This’ also seemed effective, largely due to the presence of a more active Kylie. Clad in a corset, she became sexier than during much of the show. Actually, this segment of the concert highlighted her heavy Madonna influence. After ‘Night’, Kylie reprised her first hit, ‘The Loco-Motion’. However, ala Maddy’s take on ‘Like a Virgin’ in 1990, she radically recast the song and made it a bump and grind heavy number. Kylie also borrowed from Madonna’s 1990 tour during ‘Spinning Around’, which visually reflected Kubrick’s A Clockwork Orange; Maddy used that look for ‘Keep It Together’ that year. (‘Burning Up’ demonstrated a more tangential Madonna influence. The song not only shared the title of an early Maddy hit, but also it put Kylie in an enormous outfit, which echoed Madonna’s performance of ‘Justify My Love’ from 1993.)

Now that I’ve covered my favorite moments from Fever, I can address its less effective bits. Actually, the show started poorly, as Kylie emerged in a ludicrous ‘Kyborg’ robot suit. Admittedly, it seemed cool to watch this costume come apart on its own, but the sight of a cyborg Kylie didn’t inspire me to think I’d see anything other than silliness during the concert.

Otherwise, the show reached its nadir during the three-song span that included ‘GBI’, ‘Confide In Me’, and ‘Cowboy Style’. For one, ‘GBI’ featured Kylie’s dancers at the forefront as she left the stage to change her outfit. Unfortunately, when she returned, she did a couple of numbers with a shirtless breakdancer, and the whole thing offered a lame homage to the early Eighties. ‘Cowboy Style’ strongly evoked memories of Herbie Hancock’s ‘Rockit’, but not in a positive way.

Director Chris Keating presents the material in a workman-like manner for the most part. On the positive side, he keeps music video style quick cuts to a minimum, and he also maintains the focus on the stage and on Kylie, which is where it belongs. The visual presentation never shines and becomes something invigorating or special, but Keating reproduces the concert in a generally clean and accurate way.

One misstep occurred, however. Kylie featured a lot of unique visuals on the arena video screens, and occasionally, Keating superimposed these over the concert action. This became distracting and annoying and definitely didn’t enliven the songs. The digital material should have stayed on the video screens, where we could see it in the background. It wasn’t meant for such gimmicky foreground usage.

Ultimately, Kylie: Fever 2002 Live In Manchester seems unlikely to earn Miss Minogue any new fans, but it also probably won’t alienate anyone sympathetic to her efforts. The concert presents the form of highly choreographed spectacle I expect from Kylie, and the DVD replicates the experience with reasonable accuracy. I’ve seen many concert programs superior to Fever, but I’ve also witnessed many crummier ones, so it remains a decent product.