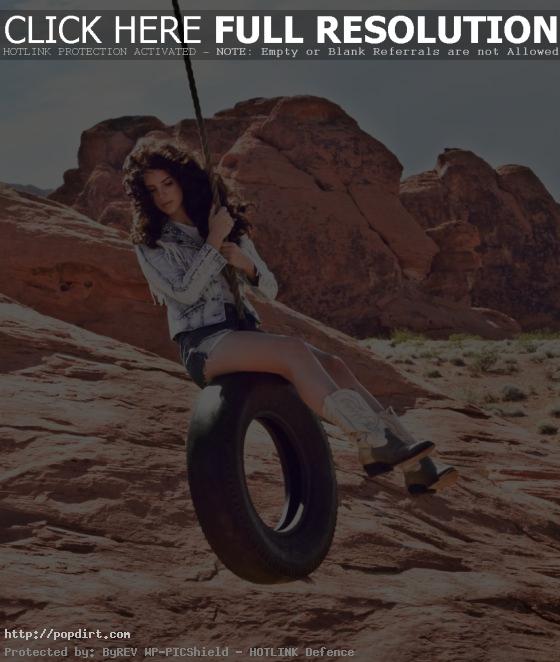 Lana Del Rey visited with Rozz of 98.7 FM in Singapore on Thursday (October 25), talking with the deejay about how she’s never photographed with a smile on her face, how she keeps her hair so smooth, the future of her “die young” tattoo if she has a long life, the frequent usage of the word “paradise”, why she dropped her real name Elizabeth “Lizzy” Grant and dubbed herself Lana Del Rey, and not being a fan of digital.

On not being someone who smiles, she said, “I just find that I’m more of a contemplative person and so I’m actually really happy, but I find when I’m thinking most of the time it just doesn’t really lend to a smile. Actually, nobody has ever asked me to smile in their pictures. They want me to seem sad, so it’s kind of always a sad undertone.”

Quizzed about keeping her hair smooth, she said, “I have my good friend, Anna, who comes with me to all my shows and she uses a lot of (unintelligible) products and lots of oil. That’s pretty much it, really.”

Asked what she’d do about her “die young” tattoo if she gets old, Lana said, “I decided that I would just use it as an inspiration to live everyday like it was my last day, even if I keep on going. It’s more of an inspiration to stay young in my mind, even when I feel tired and old.”

Questioned about her use of the word “paradise” in her album name, lyrics and her tattoo, she said, “For me, every so often I find a word or a place that really speaks to me. I believe words are sacred. They’re the one thing that translates across all the spectrums of humanity, so I believe in the power of really loving words or really, in my case, I love really tropical words. Kind of words that suggest a really heavenly afterlife, like heaven or paradise, so I just really love words that have an exotic ring to it, and I kind of try and incorporate it into my music in hopes of manifesting my actual surroundings to be as beautiful as those words.”

Discussing why she changed her name from Lizzy Grant to Lana Del Ray, she explained, “Because I wanted to have a name that was as beautiful as the music I was going to make. (Lizzy Grant) just never personally spoke to me. Yeah, for me it just didn’t feel like it was mine. I didn’t feel like it belonged to me. I kind of decided that I would be the one that decided what my name was and I would decide where I lived and I would decide what I would do. I just never deny my creative urges when it comes to my short videos or the record. I just have a really strong instinct sonically.”

On making ’70s era music videos, she said, “I think because I really am inspired by the texture that film used to have. Instead of a new digital empty atmosphere, things end up looking vintage when I do them, because I always use film to film the videos, because I just believe in the quality of having a physical conduct between what you’re shooting and what gets translated. I just really love texture, the way can record tape. It’s also a better mechanism.”