Los Angeles Confidential caught up with Lindsay Lohan for a Q&A, asking the 20-year-old before she went into rehab and before her boyfriend Calum Best was photographed using cocaine with hookers if the attention she receives puts undue strain on her relationships. “It’s funny. Since I’m seeing someone right now, we’ve been talking about it,” Lohan responded. “He’s about to go to London and I’m going to LA. If we were to talk about it and maybe get into an argument, [the press] would go crazy; they’ll dig up people we dated in the past. Luckily he’s had experience with the media before. I’ve gone through this with guys who’ve never experienced that kind of pressure, and it’s tough.”

Lindsay Lohan posted the following screen grab of her e-mail exchange with her former bodyguard Lee Weaver after he made a series of eye raising allegations to News of the World last weekend: 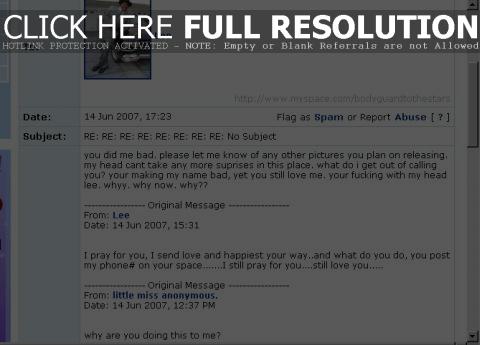 Update: The MySpace has since been determined to be fake.

A source tells The New York Daily News that Lindsay Lohan is set to leave Promises rehab soon. “She’s scheduled to be out of rehab by next week,” the source explained. “She’s taken rehab very seriously. She has cut a lot of negative influences in her life. She and [mom] Dina speak every day.”

Sources close to Lindsay Lohan confirm to PerezHilton.com that despite her ongoing recovery at Promises rehab, her 21st birthday bash in Las Vegas on July 2nd is “definitely happening.”