Louis Tomlinson Of One Direction On Touring, New Album & Getting A Dog 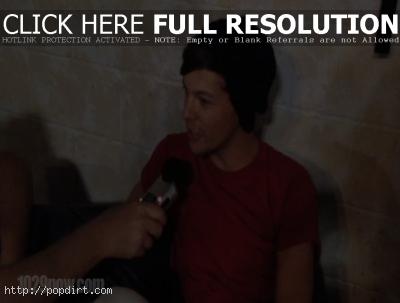 Jagger of 102.9 NOW in Dallas spoke with One Direction member Louis Tomlinson backstage the other day, where the singer talked about crazy things on tour, getting advice to stay true to yourself, trying to get a new album out by year’s end, their consideration for getting a dog, ‘The X Factor’ and going out.

You know what, for me, it’s not necessarily crazy, but the weirdest thing for us at the moment is that we have the opportunity to headline our own tour here in America and it’s just an amazing opportunity. As far as anything too crazy or something, I can’t actually outline anything in particular. It’s been a fun tour.

On advice they’ve been getting:

Everyone has just been offering similar advice. Stay true to yourself and don’t change from the guy you were before One Direction, which I think is important. I think the kind of band that we are that’s not going to happen anyway. We still are our own immature selves each day and we’re just trying to have loads of fun, so that’s the important thing.

On whether fans can expect their new album by Christmas:

Yeah, we worked on some of the tracks in LA and that’s the plan, to have it out before Christmas. It’s gonna be tight, because we haven’t had loads of time to record it. We’re just really excited about getting another record out there so soon.

On getting a dog:

We were gonna get a dog, and we were gonna call it focus, because that’s all our tour manager ever says to us is focus and we thought it would be funny if we got a dog named that. Because obviously we live in the UK, you have to go through crazy procedures to bring it to another country, so it wouldn’t really be fair on the poor dog.

On being thrown together on ‘The X Factor’:

It was almost a relief because me in particular, I entered ‘The X Factor’ as an experience and I never saw any of this.

Obviously I enjoy clubbing out in the UK but it’s frustrating because we’re not old enough here. Yeah, we all like to go out and have a laugh and if we go out as a band it’s nice. As far as getting into any trouble, we try and stay away from that. I’m sure some nights we do, but who knows.

Watch the interview via 1029now.com below.