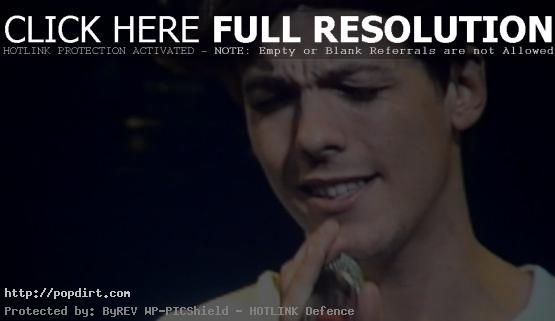 Louis Tomlinson of One Direction was on the phone with James Merritt of Free Radio. The boyband member talked about their first Brit Award win in a category that included Adele, dedicating the award to the fans, not knowing they’d win in advance, other artists they saw at the Brits and what fans can expect with the new tour.

On winning a Brit:

We couldn’t believe it. We were looking at the category and the people we were nominated with and to win that award was such a massive honor.

It feels strange to beat Adele because that album and that single were just really so massive. We’re massively thankful to the fans who voted.

On dedicating the Brit to their fans:

Of course. That award was voted for by the fans, and we wouldn’t be, coming from the X Factor and voting every week, we would be nowhere without those fans so it is their award.

On whether they knew in advance:

Could you not tell by the look on our faces and the high pitched everyone was when we did the speech? We certainly had no idea. I’m glad. Even if anyone did give a clue, which I don’t think anyone does, I would prefer not to know anyways. It’s better like that.

On whether they did “networking” with other artists:

Not really actually. We just sat around with our team at our table. There were a few people, we met Example, we saw Ed (Sheeran) again. Little Mix were there. People on our label like Labyrinth. Great guy.

On what to expect from the new tour in a year:

By that time I suppose we’ll have a new album. The new album will be out so there will be two albums worth of songs. Maybe some covers and just a much bigger arena kind of style and production on the show that obviously when we did the first tour we were limited in what we could do production wise. Hopefully we’re gonna have a bigger budget and have a show people will remember.