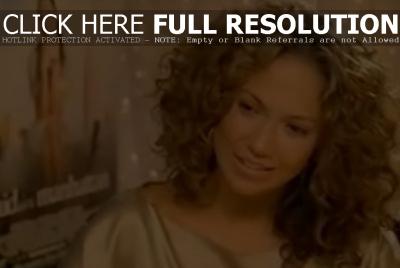 Who better to ask Jennifer Lopez questions than her own sister? Watch an exclusive interview between J.Lo and WNBC’s new entertainment reporter sister Lynda about her new film ‘Enough’. Lynda also talked about how she was J.Lo’s fashion guinea pig growing up. The video has since been removed.

May 22, 2002 – Jennifer Lopez stopped by MTV’s Total Request Live on Wednesday to premiere her new video ‘I’m Gonna Be Alright’ featuring Nas. Jennifer also talked about shooting the video, her new film ‘Enough’ which opens Friday. J.Lo revealed that she got fired at a jeans store in her younger days because she danced too much. Lopez says she’s very maternal, but she’s not materal right now. She says when it happens it happens in regards to having a baby. Lopez brought her trainer Wade out in the end to demonstrate to everyone the self-defense choke-hold move from the film.

May 22, 2002 – World Entertainment News Network quotes Jennifer Lopez as wanting to work with former boyfriend Sean ‘P. Diddy’ Combs in either music or film. J.Lo said, “I love his work as a musician and of course everybody knows we’ve worked together on videos and stuff. I would love to work with him in a movie as well. I think he’s a very talented artist.”

May 22, 2002 – IMDB.com reports Jennifer Lopez’s ‘Enough’ co-star Billy Campbell was terrified during fight scenes with her fearing he’d accidentally harm her. One time Campbell made contact causing a bruise on her leg, but J.Lo dished it out as well. “She bruised my rib and I think I bruised her arm. We were very careful and everything was carefully choreographed. But inevitably things happen. You can’t predict which way a piece of furniture is going to fall.”