Madonna Gets ‘Truthful’ On ‘American Life’

March 28, 2003 – Madonna tells Entertainment Tonight that ‘American Life’ is her most “truthful” record to date. “I could say life put me on that path,” she said. “I think I have had a number of revelations in the past few years. I think a lot of it has to do with studying Kabbalah, which is essentially like cracking the codes of the universe and it has to do with having family and growing up seeing life for what it is.” A video clip of the Material Girl addressing the controversy of her new video has since been removed. 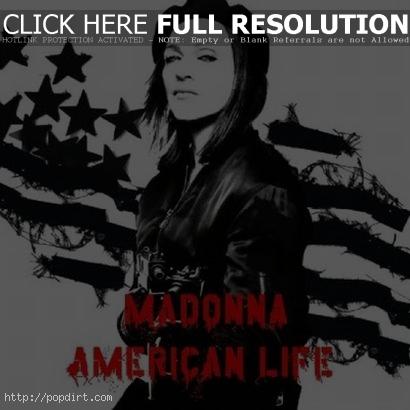 Madonna spoke with Access Hollywood about her new video ‘American Life’ and its war related message. At the end of the video, Madonna tosses a lit grenade into the lap of a Bush look-alike, who uses it to light a cigar. “It is not me being anti-Bush — it’s me being ironic and tongue in cheek,” revealed Madonna. “It’s my kind of wish for peace and my desire to sort of turn a weapon of destruction, which is a grenade, into something that is completely innocuous. It’s my wish to finding an alternative to violence, to war and destruction.”

March 27, 2003 – The Scottish Daily Record reports Madonna is employing fans as salesmen to flog her new single ‘American Life’. Fans are urged to join The Madonna Project to sell the digital version of the single in return for credit and prizes. Warner Bros record company bosses say on their website: “The Madonna Project will revolutionize how music is distributed on the internet. It’s also going to revolutionize the amount of cool Madonna prizes you have in your house. We’re going to make it worth your while.”

Madonna Opens Up About Guy Ritchie

March 27, 2003 – In Madonna’s interview with Q magazine, the singer opened up about her husband and director Guy Ritchie. “Before I met Guy, I really had my head up my ass as far as relationships go,” she admitted. “I wasn’t a very giving person. Having children, really falling in love, head and shoulders, it changes you. There’s no time for nonsense. When nitwits go on about how, ‘We’re so in love’ I think, yeah, right. Wait till you’ve been with them for four years.”

March 27, 2003 – In an interview with Q magazine, Madonna criticized her younger peers Pink, Christina Aguilera and Britney Spears. “I’m not saying those girls can’t grow into something, but I really don’t know where we’re going with the world,” Madonna said. “Everything’s so homogenized.” Read more.