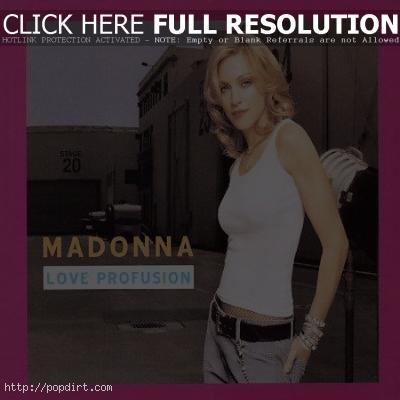 Contributed by StilettoSadist: Madonna is three times a lady on Billboard’s Hot Dance Singles Sales chart, where she has a lock on the top three positions. ‘Love Profusion’ is in its second week at No. 1, after entering in the pole position last week. ‘Me Against the Music’ by Britney Spears and featuring Madonna holds at No. 2 after formerly occupying the top slot. The two-sided ‘Nothing Fails’ / ‘Nobody Knows Me’ completes the hat trick by rebounding 5-3.

April 4, 2004 – Contributed by StilettoSadist: Madonna.com has posted the Queen Of Pop’s billboard ad in Times Square. The billboard is for Madonna’s Madison Square Garden tour stops. It was put up after the 6 shows sold out and has that written over the dates. All 6 of Madonna’s MSG shows sold out in minutes.

Guy Ritchie Orders Madonna To Not Bike In London

April 1, 2004 – Sky News reports Guy Ritchie has ordered his wife Madonna not to go cycling around London anymore. “I want to lead a normal life, but each time I cycle out and about I get seen by the paparazzi,” the Material Girl explained. “That means all kinds of weirdos can then follow you round. I feel safe in London, but Guy insists that now I only go out cycling with him. He’s sweet and very protective.” But she added: “I might just go out behind his back, he will never know.”

March 30, 2004 – Madonna was accompanied by her bodyguard leaving her Saturday morning (March 27) Pilates class and heading to the Kabbalah center for a spiritual workout in Beverly Hills, clutching a Starbucks coffee and wearing a trendy Von Dutch truckers cap.

March 30, 2004 – Contributed by StilettoSadist: DrownedMadonna.com reports the high demand for tickets to the ‘re-Invention’ tour have forced Madonna to announce her British dates gradually to prevent mayhem and computers from crashing. Her first London gig sold out in minutes leaving 250,000 hopeful fans without tickets. A second date was added soon after with seats filling up just as quickly. Madonna will be playing five gigs in London altogether according to an insider.

4 thoughts on “Madonna Pulls A Hat Trick On Billboard”