Billboard.com reports that on April 22nd, Madonna will perform her new songs live for the first time in a one-hour MTV special, ‘Madonna on Stage & on the Record.’ The show will be taped at the network’s Times Square studios in New York, and will air on MTV at 10 p.m. ET/PT. Madonna will also take live questions from the audience. Contest winners from Infinity Broadcasting-owned radio stations around the country will be invited to attend the show.

How ‘Will & Grace’ Nabbed Madonna

April 7, 2003 – TV Guide Online reports Madonna’s April 24th guest shot on NBC’s ‘Will & Grace’ caps a two-year pursuit on the part of the sitcom’s co-executive producer Tim Kaiser – a mission that involved some wishful thinking, a little behind-the-scenes diplomacy and, perhaps most importantly, a bribe no material girl could resist. “I sent a lot of flowers,” Kaiser laughs. “Madonna loves English roses, so I began to send these fantastic arrangements.”

Madonna’s ‘American Life’ To Get ‘The Leak’

April 7, 2003 – HitsDailyDouble.com reports MTV will debut a new feature called ‘The Leak’, which will make a free stream of an entire album available on MTV.com a week before the album’s scheduled release date. Madonna’s ‘American Life’ will be the first to get Leaked on April 16th. The album is set to hit stores April 22nd.

April 7, 2003 – Jeannette Walls of MSNBC.com reports Madonna is rehearsing for an MTV Live special, tentatively scheduled for April 22nd, to coincide with the release of ‘American Life’. 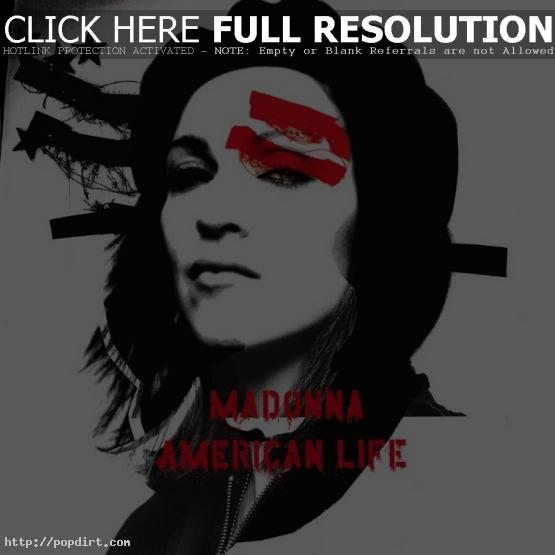 April 6, 2003 – The Sunday People is the first publication to review Madonna’s new album ‘American Life’, giving it 4 out of 5 stars. They give the title track a 4/5 rating, and rate ‘Nobody Knows Me’ the best track on the album 5/5. ‘Mother & Father’ also got a perfect rating, with their comment, “Move over Kylie. This 80s-style disco tune has dark lyrics. Also sings of her love for her father.” The worst track? ‘Die Another Day’, the Bond theme which they describe as “not her finest moment.”

Madonna Weighs In On Iraq Invasion

April 4, 2003 – Madonna recently chatted with Launch.com about her thoughts on the invasion of Iraq and how she addressed it in the now shelved ‘American Life’ video. “Well, I think the war that’s going on in Iraq right now is affecting everything,” she said. “I think everyone is glued to their television, nobody knows what’s going on, everybody’s scared. I don’t think that people are as concerned as they usually are consumed as they are being entertained or distracted, you know what I mean? And that’s kind of what the video is about, ’cause it starts out with the ultimate distraction, a fashion show, catwalk, beautiful people, perfect male, female six-foot Amazon Uber people…As a society we’ve become obsessed with obtaining that image or aspiring to it. But I needed that as juxtaposition to what’s really happening in the world.”