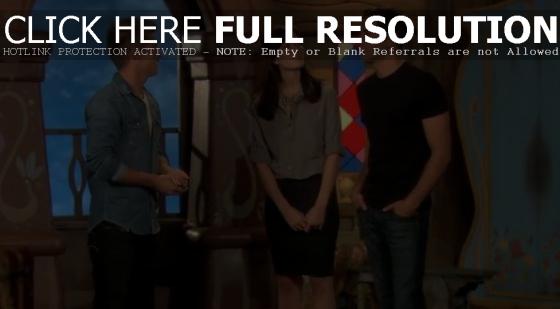 Mandy Moore and Zachary Levi discussed their upcoming Disney movie ‘Tangled’ during an interview on Radio Disney’s ‘Celebrity Take with Jake’. “Rapunzel is sort of a feisty, spirited, curious young woman,” Moore said about her character in the animated film. “She’s 17 about to turn 18 and we sort of meet her right on the cusp of her birthday, and she’s sort of had this lifelong dream to escape this tower she’s been living in her whole entire life. Then she meets this guy over here and starts some crazy adventure.” Watch the interview via YouTube below.

Mandy Moore At The ‘Tangled’ Premiere

November 18, 2010 – Mandy was on hand for the premiere of Disney’s 50th animated feature ‘Tangled’, which has the singer/actress voicing Princess Rapunzel. Popstar! caught up with Mandy and her co-star Zachary Levion the red carpet. Mandy talked about how the role wasn’t too harrowing, being aware of the fairytale before signing on to the film, and the worst haircut she ever had. Watch the interview with Mandy and Zachary via YouTube below.

October 30, 2010 – Mandy visited ‘Jimmy Kimmel Live’ on Thursday night (October 28). The 26-year-old talked about her marriage to Ryan Adams, how being married has helped her become more domestic, her vacuuming obsession, Ryan being a metal fan and getting schooled in metal’s different genres, being homebodies, her “Uncle John” having an accidental encounter with herbal cookies, and lending her voice to the Rapunzel doll. The 2-part interview at YouTube has since been removed.