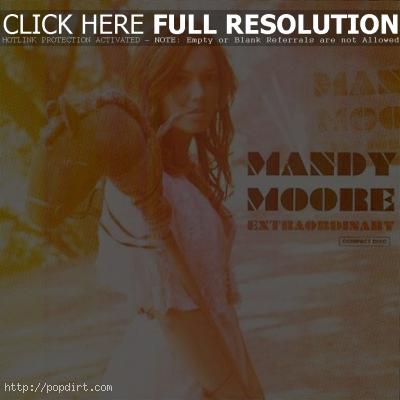 Mandy Moore is out with the music video to her new single ‘Extraordinary’, from the singer songwriter’s forthcoming album ‘Wild Hope’, out June 19th. Watch it below.

May 7, 2007 – Mandy was on the phone with AJ’s Playhouse on Channel 933 in San Diego on Friday (May 4). Mandy talked about hating ‘Candy’, her new sound, the process of recording ‘Wild Hope’, her musical influences, maintaining a good image because “people don’t really care about me”, and rumors she’s dating a singer from San Diego. The interview audio at akamai.net has since been removed.

May 1, 2007 – Mandy was on the phone with Star 98.7 FM in Los Angeles on Friday (April 27) to talk with Valentine & Lisa Foxx in the morning about the station’s “Extraordinary Mom” Contest, where winning moms get to see Moore in a live on May 11th in her first Star Lounge performance. star987.com has since switched formats.

April 21, 2007 – Mandy visited the Mix Morning Show on Mix 107.7 in Dayton, Ohio on Tuesday (April 17). Mandy discussed her television viewing habits, not missing much this season on ‘American Idol’, the new single ‘Extraordinary’, 7 million CD’s sold, preferring music to acting, meeting the Dixie Chicks at the Grammys and flipping out like a nerdy fan, and took some phone calls from fans. The interview audio at akamai.net has since been removed.

Mandy Moore Forgets Her Own Lyrics

April 19, 2007 – Star magazine reports that when Mandy performed for a the prom for the devastated students of Enterprise High School in Alabama, who had recently lost eight classmates in a tornado, the singer forgot lyrics to one of her old songs. “When Mandy came out on stage everyone was really excited,” a witness explained. “But then someone in the audience asked her to sing one of her older songs and Mandy completely blanked. She didn’t know any of the words. She had to pull out her blackberry and read the words from there. Everyone in the audience was so confused. It felt like a phony was karaoking to her song.”