Marina And The Diamonds On America, Twitter, Touring With Katy Perry & Coldplay 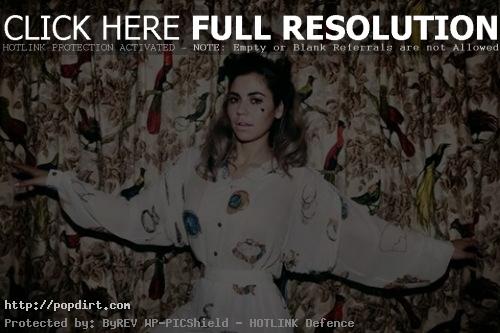 Marina Diamandis, better known as Marina and the Diamonds, visited the Z100 studios in New York City recently. The UK songstress chatted with Mo’Bounce and offered her impressions of America, discussed her song ‘Primadonna’ and new album ‘Electra Heart’, what it was like touring with Coldplay and Katy Perry, her Twitter usage, pushing her music on people when she wasn’t good enough initially, and what fans can expect with her live shows.

On the story behind her stage name and real name, she said, “Well, I’m half Greek and my surname is basically diamond in Greek.”

On being noticed more in America, she said, “It’s amazing. Obviously all artists are like the holy grail is America when you’re from the UK, but I reference American culture so much in my music, especially on ‘Electra Heart’. I wrote it when I was pretty much living here. Yeah, there’s just something, I just find the country fascinating. Now after having written about it for so long, it’s nice that I’m getting a lot of fans here. It’s very exciting for me.”

On her views of America, culture, Marina said, “Not to go too deep or anything, but as an artist, it’s kind of fascinating. I almost feel like fantasy and escapism is quite central to the culture here. I can be anything. I can be anybody. As an artist, that’s why I liked it. On the other side of things, the health ads are weird. On TV. You have so many health ads. What is that? Connected to the health ads, the 24-hour pharmacies. In the UK, a pharmacy for us is like deodorant and makeup. Here it’s like eggs on the drug aisle. Weird. It’s like fruit loops and tampons.”

Talking about the ‘Primadonna’ music video, she said, “It’s kind of like referencing MTV ‘Cribs’ / ‘Lifestyles of the Rich and Famous’. It’s set in a mansion in Copenhagen actually. It’s very girly. It references Marilyn Monroe a little bit. It’s kind of high maintenance women. Obviously not me.”

On touring with Katy Perry and Coldplay and how they differed, she said, “I would say in terms of theatrics, it’s pretty similar. Coldplay puts on a very big show, but Katy is obviously much more girly, cartoonish. It’s weird. They’re both on the different ends of the spectrum, but I seem to fit both audiences, which is nice.”

As for the behind the scenes of the Perry tour, she said, “They want you to say it was a slumber party. Well, it wasn’t, but even when I have support on my own tours, I don’t really hang out with them that much because you have so much to do and it’s not like you’re at the venue the whole day. She was lovely and we did hang out, but it’s like with Coldplay. I’d see them a few times and that’s pretty natural.”

On her use of Twitter, she said, “I don’t really like when people don’t do their own Twitter, because it makes me not want to follow them. You get spammed with loads of stuff. It’s not from the artist’s mouth.”

When asked about if she was one of those people who used to push her demos on people trying to get a break, she said, “You are that person when you’re not really good enough, I think. I know that sounds really harsh, but it’s usually when you’re not good enough. Just speaking for me, I wasn’t ready to be signed, so I was bugging people. Then I stopped bugging people, and a year later I became good and as soon as I started to produce my own stuff, almost immediately I got attention. People are really thirsty for good music.”

October 2, 2012 Jeff C Multimedia No Comments Marina and the Diamonds