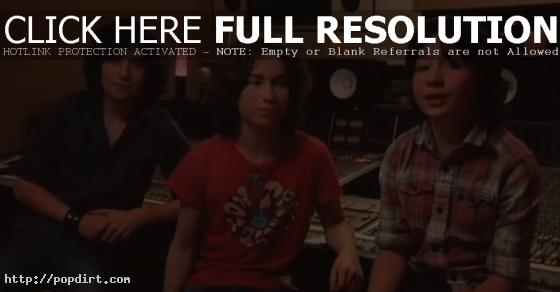 Forrest, Alex and Andre Burnham of the sibling pop trio Burnham have recently signed to Island Def Jam and are featured in an introductory video. The guys are in the studio and talked about the recording process and how the coolest moment was getting signed to a major label. They also are seen squaring off in an arm wrestling match and doing a photo shoot at the beach. Their debut single ‘Catch Me If You Can’ just hit the airwaves and will be available on iTunes beginning July 20th.

“Some of the things people don’t know about recording is that we’re not just all together as a band playing with one mic. That’s how they did it with The Beatles,” Andre explained.

As for the multiple takes to record a song, Forrest said, “One more means one more, just like there’s plenty more to come, but one last one means that’s the very last one and after that you’re done.”

Talking about getting a label deal, Alex said, “It’s amazing being signed to Island Def Jam. It was the coolest moment when we first got signed. We all went to do a showcase at Jay-Z’s old office at the label, and LA Reid was there. We played a few songs acoustically and he sort of fell off his chair.”

“Look out for our debut album, it should be coming soon, so thank you for all watching and taking the time to load the video.”