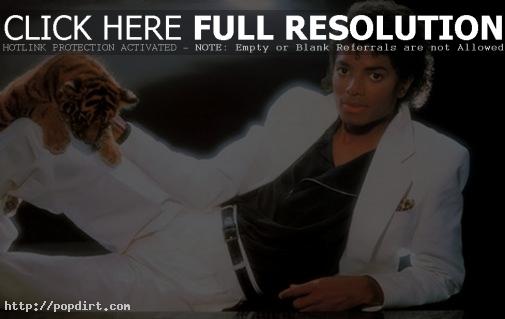 The Sun reports Michael Jackson shelled out $35,000 for a one year old pet tiger. Jacko is having the tiger flown to his Neverland ranch in California. A pal of Jackson’s told the Sun, “The tiger was getting too big for the owner’s yard. It will make a great pet.”

March 30, 2002 – Jay Leno joked during his Tonight Show monologue Friday night, “What a crowd. You sound like Clinton and Gary Condit when they heard Britney Spears was single again. Yeah!” Later, he joked about Liza Minnelli’s wedding, “Actually, the weirdest part of the wedding, when Michael Jackson and the priest were fighting over the ring bearer. That was awful.”
http://popdirt.com/britney-clinton-condit-jacko-make-leno-monologue/3444/

March 26, 2002 – Following the big Oscar wins by black actors Denzell Washington and Halle Berry on Sunday, Jay Leno joked during his Tonight Show monologue last night, “In fact, this has changed Hollywood so much, Michael Jackson now is talking about being black again. Can you imagine?”
http://popdirt.com/michael-jackson-goofed-on-in-leno-monologue/3346/