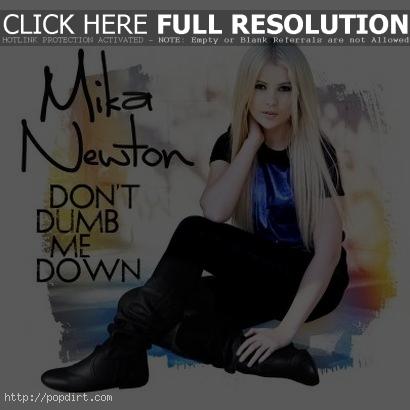 A massive star in her native Ukraine, Mika Newton is bringing her talents to America. Fresh off her performance of the song ‘Angel’ at Eurovision last May, Mika embarked on a journey of expanding her music horizons. Wanting to bring her music to the world, Mika packed her bags for Los Angeles to start working with the music producer and ‘American Idol’ judge Randy Jackson. Her first single is ‘Don’t Dumb Me Down’, a mix of soulful lyrics and booming vocals. The song will be available beginning February 21st through iTunes and other digital retailers. Watch the tune’s music video via YouTube below.

Later this year, the singer/songwriter will release her debut album through Randy Jackson’s label Friendship Collective in association with JK Music Group. Jackson was hugely impressed with her vocals and star potential and has had a large part in bringing her US album debut to life. Working with heavy hitting songwriters Rune Westberg (Adam Lambert, Daughtry) & BC Jean (Beyonce) on ‘Don’t Dumb Me Down’, and seasoned producer Randy Jackson, it’s not hard to see why Mika is lighting up stateside.

One thought on “Mika Newton ‘Don’t Dumb Me Down’ Video”