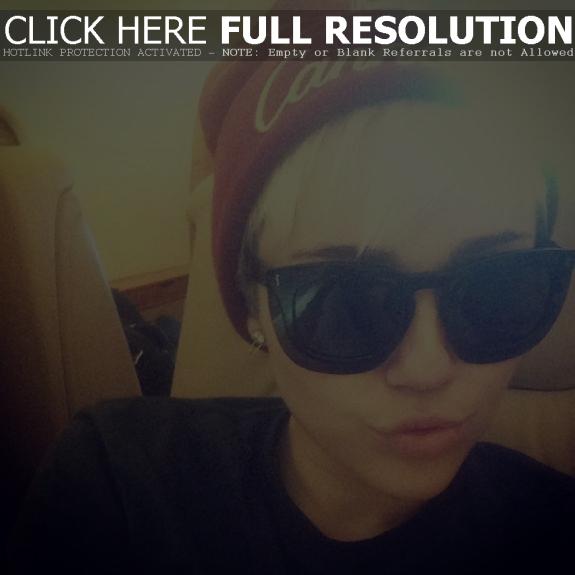 Miley Cyrus appeared on ‘Jimmy Kimmel Live’ on Tuesday night (June 25) for an interview and the first live performance of her new single ‘We Can’t Stop’. The former ‘Hannah Montana’ star also performed ‘Fall Down’, joined on stage by will.i.am.

During the interview, Miley talked about her collaboration with Snoop Dogg. “I started hanging out with him in the studio and I worked with Diplo a little bit and they worked on their project when they were making the movie. They had sent me ‘Ashtrays’ and I really liked the song. Not ashtrays, the song is called ‘Ashtrays and Heartbreaks’, and we ended up doing that together and we just kind of became the homie. He’s been really involved. He comes by the studio and listens to my music, he’s involved and he’s excited about what I’m doing with my career, so that’s cool.”

Asked if she and Snoop socialize, Miley said, “We’re more alike than you’d think. We’re very similar. He actually said that.” When Kimmel said it’s because he’s “so high he doesn’t even know what his name is”, Miley said, “Me too, so it’s fine. We both are. That’s how we get along so well I guess.”

On giving her number to one of her biggest fans and if hiring her “stalker” was a good idea, Miley said, “She’s more than a stalker. She’s so obsessed that she knows things about how to break VEVO records, which we did with her help, and I don’t know anything. I don’t YouTube or whatever. She knows what has to be done in what amount of time to be #1 or to break the record. When I first called her, I called her off my friend’s phone. Then I just started texting her all the time. I bet she gets more annoyed of me than I do of her. I hit her up all the time. I’m like, ‘Yo, how are we gonna make this happen? You gotta make the fans trend this. You gotta do that’.”