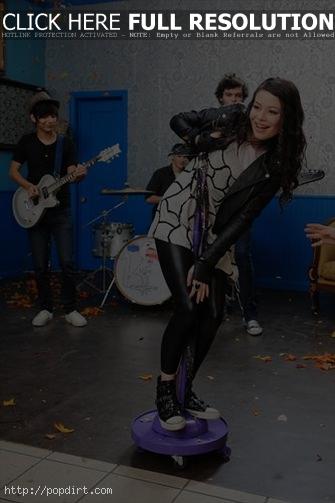 Miranda Cosgrove checked in with fans on her blog at MySpace (@mirandacosgroveofficial) on Wednesday (February 11), talking about her Kids Choice Awards nominations, an appearance on ‘The Ellen Degeneres Show’ on Presidents’ Day, and rehearsing for her upcoming tour. The ‘iCarly’ star tells readers:

I have a few weeks off from iCarly so I have been rehearsing for hours and hours everyday for when I go on tour! It’s been really fun! I’m going over singing a lot of my songs from my upcoming CD as well as songs that are already out and working with a choreographer as well. It’s a lot of work to sing and run around at the same time! I had no idea how much fun it would be though! I have been doing a lot of exercises also that help build up endurance so that it’s easy to sing a lot of songs in a row. It’s so exciting to know I’m going to get to go on tour and meet all of you guys and perform! Today I was deciding what order I’m going to sing the songs in on tour and since I’m almost finished with my CD, I’m going to get to figure out a single and everything soon! I’m hoping to start off with some small shows before I’m finished with this season of iCarly and can actually go on tour so I’m super prepared. So I’ll keep you guys posted on that! I have a lot more rehearsing to do!