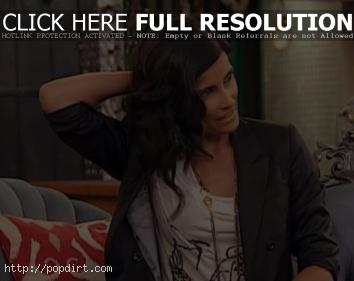 Nelly Furtado visited ‘It’s On with Alexa Chung’ in New York City on Thursday (July 30), talking about on-the-road webisodes, spritzing herself for the audience, her overeager security crew, a possible collaboration with the rapper Nelly, eating food off the floor, and her new Spanish album ‘Mi Plan’.

Asked why she decided to record a Spanish album, Furtado responded, “For me it’s romantic, it’s songs about amore, love.”

Talking about her security and a recent snafu, she explained, “What happened, I had a concert and I have a label called Nelstar records and my band had a showcase in Toronto, and my head of security did not let a band member’s mother in the backstage. I was so embarrassed. She was mad at me that night. It’s a necessary thing. It can be crazy.”

Asked if she would have changed her name for the rapper Nelly, Furtado responded, “No, are you kidding? I was mad when he came out with one name, because I wanted to just be Nelly, and then I went with Furtado. I think the label in the beginning was like you should just use Nelly, it’s shorter. I was like no, I want to use Furtado. Luckily I did, because then Nelly came out three months later.”

Watch the interview at MTV.com.