Heidi Range spoke with OK! magazine about how her fiance Dave Berry popped the question after dating seven years. “Our flat overlooks Parliament and the London Eye and we’ve got amazing views of the fireworks on New Year’s Eve, so we decided to have a relaxed evening drinking champagne as we were flying early (to India) the next day,” the Sugababes star explained. “I was in my pajamas putting the washing on while watching ‘Love Actually’ and at five to midnight, I went to get my slippers to go on the roof terrace (and then he proposed).” The couple plan on having the wedding October 2011.

March 21, 2010 – Sugababes newcomer Jade Ewen spoke with The Daily Record about the abuse she received after it was announced she’d be replacing founding member Keisha Buchanan in the British girl group and how her parents were there to support her during the difficult time. “It’s fair enough for fans to have an opinion on the new line-up but, when they say they want to kill me, that’s a bit much,” Jade said. “I’ve had people say things like, ‘It’s a good thing your dad can’t see your ugly mug’. People say racist things or that they want to hurt my family members. My mum struggles with anything negative. I tell her even the biggest artists like Beyonce get criticism.” Read more.

March 14, 2010 – Sugababes are out with videos describing songs off their new album ‘Sweet 7’, including a collaboration with Sean Kingston called ‘Miss Everything’.

“Just a nice feel good song,” Amelle Berrabah said. “It’s very uptempo. The lyrics in there are quite funny as well. I wouldn’t take it too seriously.” The girls then sang a few lines to the track to demonstrate what not to take seriously.

Sugababes Discuss ‘No More You’ 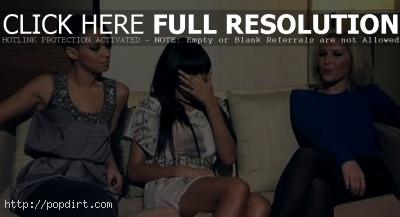 March 12, 2010 – Sugababes are out with videos describing songs off their new album ‘Sweet 7’, including a track written by Ne-Yo called ‘No More You’.

“This is another one of the downtempo songs on the album,” Heidi Range said. “It’s got a really good story to it, and even when we perform it we kind of put actions into it. I get a bit carried away with the story of the song.”

Sugababes’ Jade Ewen Discusses ‘Thank You For The Heartbreak’

March 12, 2010 – Sugababes are out with videos describing songs off their new album ‘Sweet 7’.

“One of my favorite songs would have to be ‘Thank You For The Heartbreak,” Jade Ewen said, seated next to her bandmates Amelle Berrabah and Heidi Range. “It’s a real uptempo, uplifting tune. I love dancing to it. Me and the girls every time it comes on, ‘We love we love this song.'”

Video of the girls discussing ‘Thank You For The Heartbreak’ has since been removed.