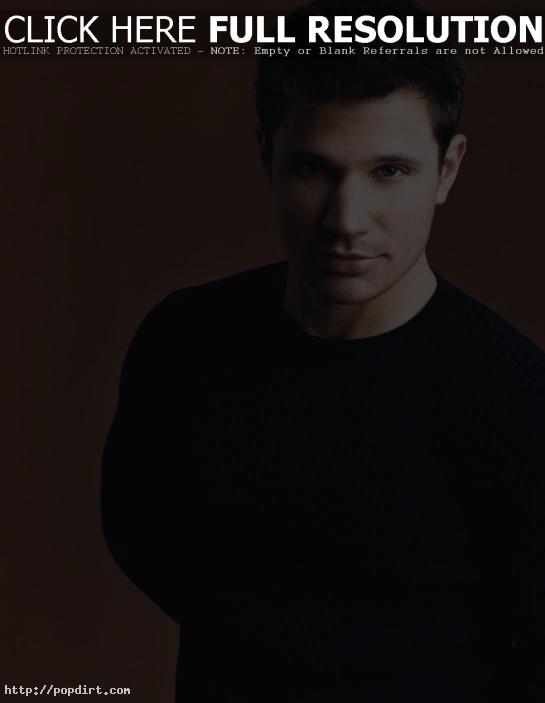 98 Degrees star Nick Lachey was on Late Night with Conan O’Brien to talk about his new album ‘SoulO’, married life with Jessica Simpson and their MTV reality show ‘Newlyweds’. Read on for a rough transcript.

>> Woman in audience: Call me!

Conan: Yeah. The man is married!

[ Laughter ] When I heard the idea for this show, I thought, marriage, it’s a tricky proposition. First year of marriage, especially for young people, can be very dodgy. It’s a tense time. And you are putting the whole thing on television. I thought this was the stupidest idea I’d ever heard of for you. Entertaining for us, but were you at all worried about this?

Nick: I was at first. I would be lying if I said I wasn’t concerned. But it’s actually turned out to be great therapy and a great teaching tool for me. You know, I can actually play the episodes back and say, “See, Jessica, look what you’re doing. Look how you’re acting.”

[ Laughter ] “You’re not even making any sense.”

Conan: Right. But the problem is that can boomerang back on you. You know, one of the gr — you know, there’s an episode where she’s out of town, and it looks like you went to a strip club. I know that you were just judging a bikini contest.

Nick: That was innocent. I was actually — I was at the — at the club. It was a bikini contest. I was judging it for a radio station.

Nick: Well, this was in order to get my record played.

Nick: This is purely professional.

Conan: But you neglected to mention it to your wife. She left town, and then it just — you sort of got busted. And it’s all on television.

Nick: Well, it’s just ’cause I see the rationale in it, doesn’t mean she’s going to.

Nick: In fact, that probably means she’s gonna be pissed.

Conan: Right. Well, the other thing is, one of the great things in marriage that you can’t — it’s all on tape. If it wasn’t on tape, you can do what I do, which is go, “Hey, baby, you’re just remembering it wrong.”

[ Laughter ] “Your head’s a little mixed up.” But she can rewind the tape and go, “no, look, you’re wrong.” And then you’re screwed.

Nick: Yeah, well, luckily our Tivo, I think, has erased a few of the episodes. So it’s only, like, the last three I have to worry about.

Conan: Get rid of Tivo immediately. Now, I didn’t — I didn’t know — I didn’t think I knew you, like, or what your personality was like, or what kind of person you were before the show started. And I watched it, and I immediately started to like you, because you are a cheapskate in a refreshing way.

[ Laughter ] Which I think is kinda neat. You’ve got — you’ve obviously done well. You’ve obviously got money in the bank. Jessica’s running around spending money left and right, and you are moving your own furniture. And you’re always, like, getting the other guys from 98 degrees to move a piano into the house.

Nick: I know they’ve got nothing else to do right now, so they can come help me move.

Nick: No, you know what the reason —

Conan: They’re not gonna be helping you out anymore.

[ Laughter ] Well, one of them — one of them is my brother, so he’s bound by blood to help me.

Nick: But the reason I’m a cheap — I’m not really a cheapskate. It’s just after Jessica’s done, there’s no money left over.

Nick: So there’s nothing left for me to spend on movers. I have to — all I can rent is this six-speed u-haul, you know?

Conan: But there are — there’s like — there’s episodes where you’re practically doing the wiring yourself in the house. And I’m thinking, you know, you could afford — I mean, you didn’t want to get a maid in there to help out, and the place was really messy.

Nick: But Jessica’s happy ’cause it’s off the floor.

Conan: What’s the most expensive thing that she likes to throw money away on?

Nick: Oh, man. I think her new thing is, like, the louis vuitton handbags, you know. And there’s, like, one every two or three months. There’s like one every season.

Conan: See, that’s — Louis Vuitton — if it has the Louis Vuitton logo on it, I don’t care if it’s a little coin purse, it’s automatically like $2,500.

Conan: They make rip offs of Louis Vuitton stuff that you can buy in times square.

Conan: She can tell?

Conan: She’s like, “thank you, yay.” Fake diamond, everything. Yeah.

Nick: I got away with the engagement ring.

Conan: I put a Porsche logo on a Ford Taurus and —

Nick: She went for that?

Nick: Yeah. You know, I mean — I mean, I held out for, like, four years, man. You know? The last thing I’m gonna do is in the first year, you know, all of a sudden, like, “hey, why don’t you guys come and film my – you know, my private life.” Plus, you guys don’t want to see it. It’s, you know – it’s pretty ugly sometimes.

Conan: No? I don’t know what that meant, but now I want to see it.

[ Laughter ] Now it’s exactly what I want to see.

Nick: Us doing the show, we said we’re willing to open up our lives, but we got to draw the line somewhere and, you know, definitely the bedroom and the bathroom for obvious reasons.

Conan: That’s gonna be on the special DVD edition.

Nick: The blooper — the blooper home video. We’ll put that out.

Conan: I’ve mention — I’ve noticed something on the show, which is, whenever you get mad and need to calm down, you go and get miller lite. And I thought to myself, do you have some kind of deal with miller lite? ‘Cause you’ll be angry and go, “I’m so mad. Soothing miller lite.”

[ Laughter ] And, you know, I just think to myself, okay, there’s a little Miller Lite money coming your way.

Nick: It’s just the special ingredient in miller lite. I don’t know what it is, but it is a little bit —

Nick: But I feel like I should. They sent me a nice pool table lamp for my game room, but that’s about it.

Nick: But they’re saving me on calories. They think it’s a fair trade somehow.

Conan: You’re getting money somewhere. I just know it.

Conan: And — you have a CD on your record. You have a song —

Conan: Okay, you’re out of the show. That’s it.

[ Laughter ] It’s the first song on the CD is “Shut Up.” And the lyrics of the song are — “sex is the only thing that’s really working right now. So shut up and let’s have sex.”

[ Laughter ] Is this coming from your personal experience?

Nick: I actually wrote the song before I got married, so I can honestly say —

Nick: It’s not specifically about Jessica, although sometimes —

Conan: How about the song, “Stop buying those freaking Louis Vuitton bags”?

Nick: There’s a song called “Damn you pet Louis” towards the end of
the CD.

Conan: “SoulO” is in stores now. The second season of “Newlyweds: Nick and Jessica” will air early next year on MTV. Very nice to have you here.

Nick: Thank you for having me.

Conan: Thank you for coming by. Nick Lachey

«Mariah Carey Mania In Manila!
A Certain Sexuality Between Timberlake And Mayer?»