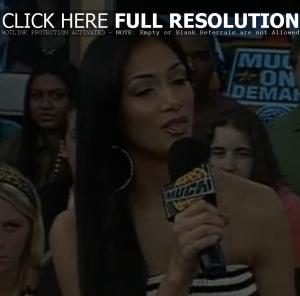 Nicole Scherzinger of the Pussycat Dolls visited ‘MuchOnDemand’ on Monday (April 23) at the Chum/City Building in Toronto, Ontario. The pop star was interviewed about potential sexual harassment at the workplace in the music industry, played a dance move or sexual position quiz and was asked if she had a boyfriend.

Asked if she’s been hit on by those in her male dominated industry, Nicole said, “You know what, fortunately, nobody has. I think it’s the way as a female you have to carry yourself. You have to put it out there that you’re no nonsense and you’re all about business too. I think guys are more afraid of me than anything.”

Asked if she had a boyfriend, Nicole said, “I always say that I’m in a relationship with my music.” When subsequently asked if she watched MTV, Nicole said, “I watch MuchMusic”, knowing that his next question would’ve been about MTV ‘Laguna Beach’ star Talan Torriero, who she’s been lined to.

Check out pictures from WireImage. Watch the interview below.

«New Job For Sanjaya Malakar
It Takes 18 For Fergie»