One Direction Are Pink In A Boyband & Get Pelted With Carrots 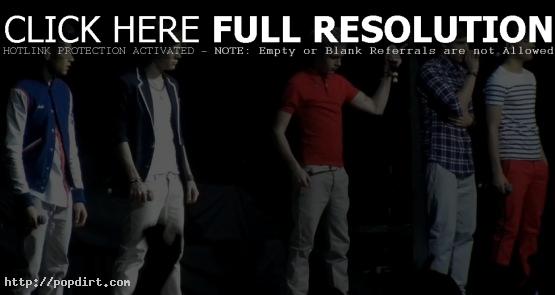 Niall Horan, Zayn Malik, Liam Payne, Harry Styles and Louis Tomlinson of One Direction were in the studio with 103.5 KTU in New York City on March 13th, where the boyband talked about Simon Cowell putting the group together, their success, what to expect from their album, their influences and why girls throw carrots at them on stage.

On getting to know each other:

We had two weeks to get to know each other before we performed together at my house, and we kind of just made sure we were friends first. We hung out and played soccer.

Being excited about how things have gone:

It’s been real exciting. When we started out we expected to do maybe one record in England and see how that goes, but the power of YouTube and Twitter it expanded it across Europe and now we’re here in America, it’s crazy for us at the moment.

On what to expect from the album:

There’s something different for everybody. There’s slow songs, upbeat songs… We just hope there’s something on there that you like and enjoy, and maybe something that surprises you that you didn’t expect us to do, so that’s what you can expect.

We’ve been told that we’re like Pink in a boyband, so that’s what we try to work around. Kind of pop rock.

On carrots being thrown on stage:

When we first started out on X Factor, just because I thought I was witty and funny, I found out I was actually neither of those, I decided to say I like girls who eat carrots. Ever since, girls have thrown carrots on stage, given me carrots as a gift.