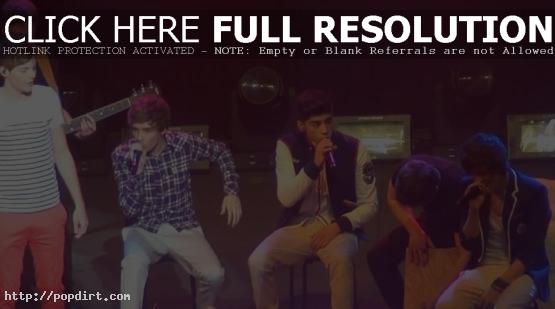 Nathanael Cooper of News.com.au went backstage for an exclusive interview with One Direction members Niall Horan, Zayn Malik, Niall Horan, Liam Payne, Harry Styles and Louis Tomlinson. The boys talked about whether they’d seen much of Brisbane, being greeted by loads of girls everywhere they travel, reaching number one with their ‘Up All Night’ debut album in several countries and the dedication shown by their fans.

On having thousands of girls greeting them everywhere, Liam said:

I dunno. It’s been incredible, but it’s something you can never, ever really get used to. It’s not one of those things that… it’s still a surprise when you see that many people outside somewhere. You’re like wow, there’s this many people here. It happens a lot of the time, but our hotel today has been literally crazy. We went out like 5 o’clock this morning to go surfing and there was 10 or 15 people outside and when we got back, there was hundreds.

On going number one in multiple countries with their debut album, Louis said:

Let me tell you, we’re really happy about Australia as well, because this is the first place we’ve gone number one for two weeks with the album, so that is something that is pretty special to us.

On the dedication of their fans, Niall said:

We worked very hard on our album. We wanted to be proud of it ourselves, and you know our fans have shown their dedication over and over again, and they’ve got some great chart positions for us recently and we’re very very happy.

On whether they’ve ever taken their fans for granted, Zayn said:

Definitely not. We’ve appreciated our fans and we love the fact that they’re so dedicated and so supportive. Obviously like Louis was just saying, our album is number one for the second week in a row, and it’s amazing to get that support from our fans.

«Liam Payne On Twitter, Dating And Disguises
Salvador Santana ‘Into The Light’ Video»